A major source of Greek statuary is the range of dedicatory monuments which have been found in Greek sanctuaries, where they are dedications to a god, or in public places, where they are commemorative of an event or person. As such, many have been discussed under other headings in this programme. A majority of Archaic Sculpture, apart from the funerary, falls into this category. In later periods the principal monuments are statues of divinities and heroes; symbolic statuary, such as Victory; in the later period, action groups commemorating events (usually battles); portraits, as of victors or of public figures; and there is a large class of votive reliefs in stone, sometimes depicting the donors in an act of worship and with the receiving deity. Only in the late period does major statuary also become a feature of the decoration of private and some public buildings, with no obvious religious connotation, but often a matter of prestige; this is a result of the new palatial interests of ruling dynasties in the Hellenistic world, much copied in the Roman empire.

Cult statues of gods helped define the popular image of each deity, and were themselves dedications. An example is the bronze Athena Promachos set on the Acropolis at Athens commemorating success over the Persians, while the comparable gold and ivory Athena Parthenos stood within the Parthenon, which also celebrated Athens' military record. The types were repeated or adjusted as major dedications by the state or individuals, usually for some major civic success. Many are mentioned in texts, and many types preserved in Roman-period copies, usually with no indication of their original setting. 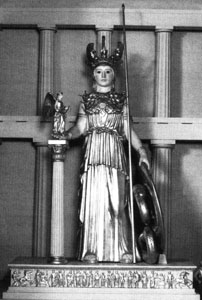 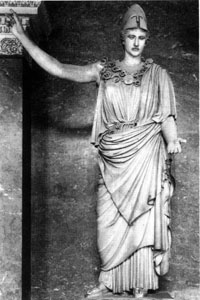 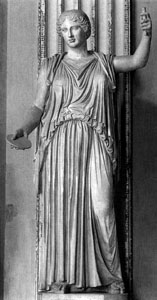 Figures of Victory (Nike), often set on columns or pillars, from the archaic period on, celebrate successes, generally in war. See the classical Nike by Paionios at Olympia, and the Victory of Samothrace, Hellenistic, in other chapters here. Mythological scenes commonly appear as the sculptural decoration on temples and they generally reflect, in the Greek manner, on the career of the the deity involved, or the occasion for the dedication of the building. In the same spirit, some sculptural dedications in sanctuaries, depicting mythological events, reflect on mortal occasions. Thus, at Pergamon and Athens, scenes of the gods defeating giants reflect successes in Anatolia against the Gauls.

These are a speciality of the Hellenistic period and were much copied for the Romans. We seldom know their original setting and purpose but many were probably commemorative or votive, although some may simply have been designed for palatial decoration. 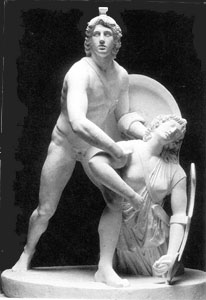 See the section on portraits. It was a Hellenistic trait to dedicate family groups of portrait figures, imaginative for ancestors, realistic for the living or recently dead. Equestrian portraits set on pillars were the model for several of Roman emperors in later years.

Relief plaques, usually set on pillars in sanctuary precincts, are the commonest sculptural dedications. They may show the donor, often with his family, making a sacrifice or offering, and the deity is often shown also, at a larger size, receiving them. Where a hero is honoured he is commonly shown either with a horse, or reclining at feast - a model for the 'death-feast' motif which is seen on tombstones in the period when the dead were regarded as to some degree heroised. 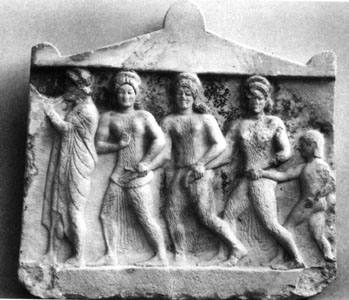 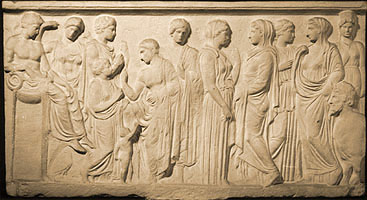 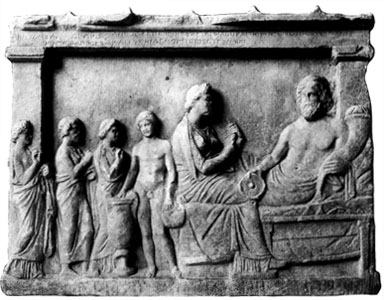 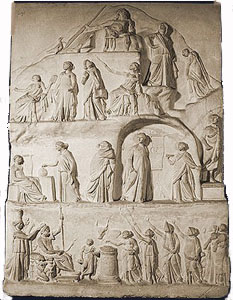 These decorate the top of pillars with decrees inscribed on them and commonly show deities or heroes. 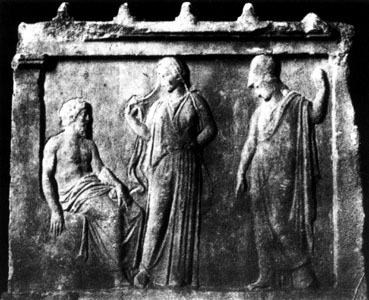 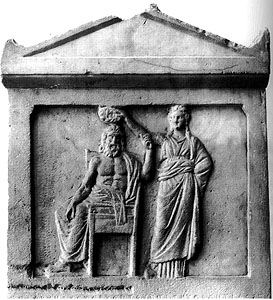