The relief gravestones of the Greek world created a mode for commemoration of the dead which has influenced funerary art in the west to the present day. It started, however, in a manner easily paralleled in other cultures, where the desirability of marking a grave was recognised, if for no other reason than to ensure it was not disturbed. This marker, which in 8th-century Greece and thereafter need be no more than a large vase, was more commonly a stone slab. The addition to the slab of the name of the dead and shaping of the stone into human form can be documented in 7th-century Greece though it was not widespread. 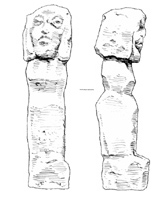 In the continuing history of gravestones two basic types emerge - figures in the round, notably the archaic kouroi and korai, and relief gravestones (stelai) with one or more figures. These at first represent the dead generically, the identity being given by inscription. Athens and Attica dominate the story but there are important local variations and inventions.

Figures in the round 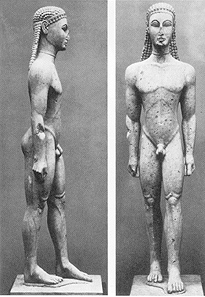 The male kouros type and the female kore, which are archetypal archaic figures, served both as grave-markers and dedications in sanctuaries. In Attica the series starts about the beginning of the 6th century BC and continues into the early 5th century but is rare thereafter. 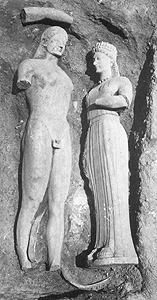 The two statues (left) had been damaged and buried together in antiquity. The kore's base is preserved: she is Phrasikleia who will 'ever be called maiden, the gods allotting her this title instead of marriage'. About 550 BC.

In Attica, around 580 BC, a series of tall gravestones begins, topped by the figure of a sphinx, on a simply decorated capital. After the mid-century the capital is elaborated as palmettes with spirals, but soon thereafter the stele type is simplified, with a palmette only. The type disppears in the early 5th cent. BC. Most figures are male and there is rough age differentiation by type: young as athlete, mature as warrior, old as man with dog. In the last phase the rectangular bases for the stelai may be decorated in relief on three sides. 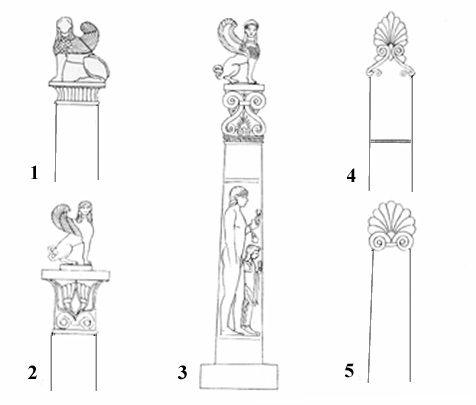 Most follow the Athenian pattern, but double sided reliefs are found in north Greece and the general Attic type continued through the Early Classical period, beyond the middle of the 5th century, when Attica is no longer making relief stelai for graves. There is more variety of figures - more women and children. 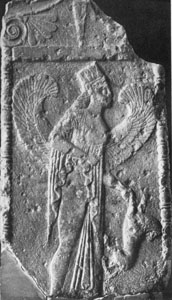 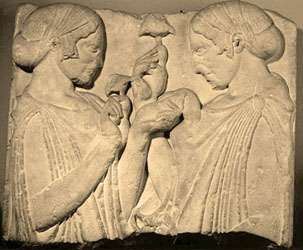 The series recommences in about 430 BC, possibly stimulated by the presence in Athens of many masons who had been employed on the new public buildings such as the Parthenon, but also answering a new need for personal memorials. The grave reliefs are more often rectangular now, with a pedimental top, and in the 4th century the figures are carved often in very high relief, almost in the round, and the monument may be built with projecting wings which may themselves carry reliefs. In the later 4th century a decree by the governor of Athens, Demetrios of Phaleron, brought an end to the series of decorated reliefs.

Women dominate the scenes, in quiet domestic situations or bidding farewell, sometimes to a warrior husband. Often there is simply a scene of quiet contemplation, seldom of active mourning. A few commemorate death in battle, but Athens' war dead were buried separately with stelai which listed their names and had small reliefs of fighting on them. Family graves were marked out in the main Athens cemetery and may be embellished by other sculpture in the round, animals or mourners. The mourning siren begins to appear as a motif for funeral art. 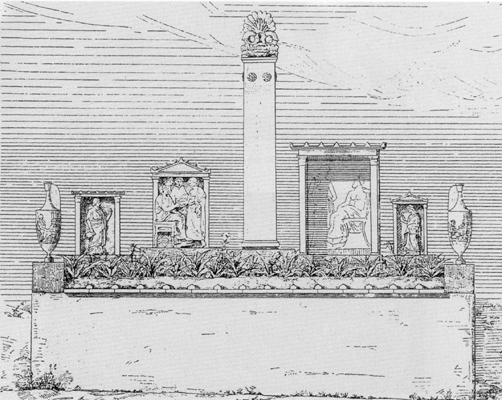 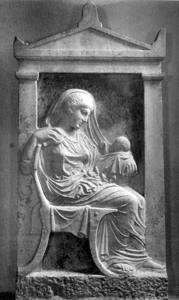 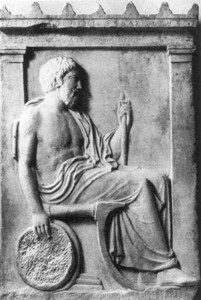 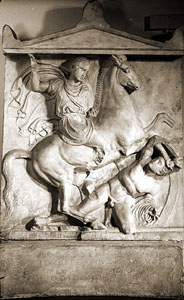 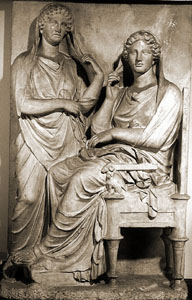 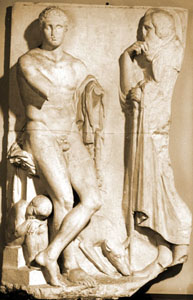 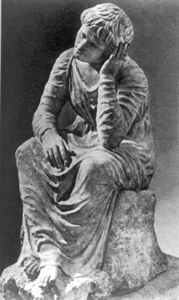 The non-Attic gravestones follow the tradition started in the archaic period without much further reference to Attic styles. 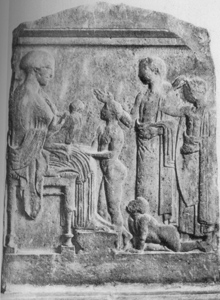 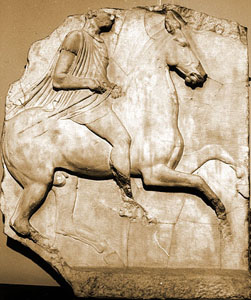 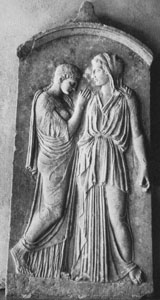 Painted clay sarcophagi and simply decorated stone sarcophagi are known from the Archaic period, from East Greece, and this is the area also where stone relief sarcophagi also appear, although rarely. An important series executed by Greek sculptors was made for the graves of Phoenician kings at Sidon in the 5th and 4th centuries, during Persian rule there. 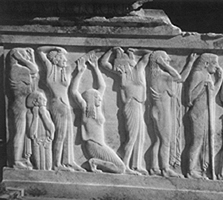 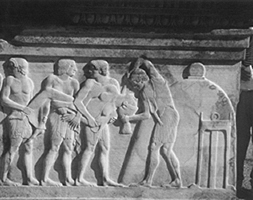 Sarcophagus from Canakkale, near Troy.
Decorated with mourning scenes and the myth of the sacrifice of Polyxena at the tomb of Achilles. About 500 BC. 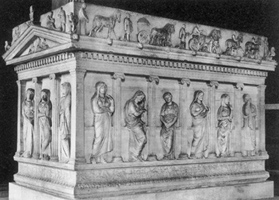 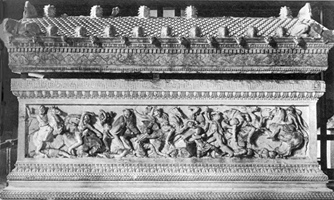 The native states of Anatolia, in Caria and Lycia, under Persian control in the 5th/4th centuries BC, were strongly influenced by Greek style in the decoration of their grave monuments, which are unlike the Greek in being mainly above-ground and often architecturally elaborate. Early examples and the Mausoleum were carved by Greek artists, but many in Lycia have a distinctive graecizing style developed locally. 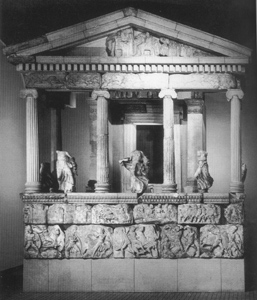 The Mausoleum at Halikarnassos. Mausolus was a Carian king. The tomb, which gives its name to all 'mausolea' is four-square on a raised base, with relief and in-the-round sculpture executed by invited Greek sculptors rather than local Ionian ones. Mid-4th century BC. The sculptures are in London. 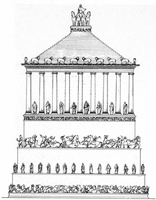 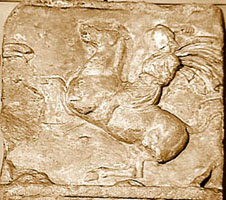 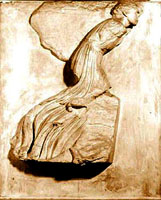 Casts of an Amazon and a charioteer from the Amazonomachy and Chariot friezes.
Cast Nos. A139 and A140

This is the commonest Lycian type of the 4th/3rd century BC.

Lycian tomb and Sarcophagus. About 380 BC. 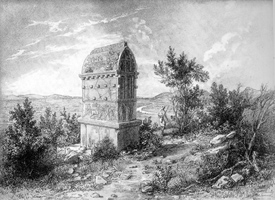 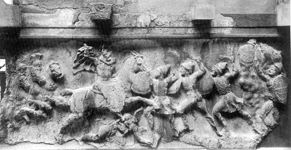 The tomb enclosure at Trysa, Lycia

The enclosure is decorated with a double frieze, in and out, mainly of Greek mythological scenes. The sculptures are in Vienna. 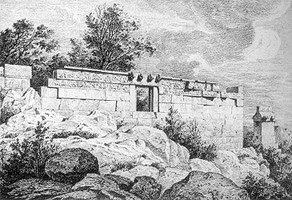 Relief gravestones of the 3rd-1st cent. BC are almost wholly confined to the East Greek world. The commonest type is tall, with a fine architectural setting, and a big figure of the dead with small attendants. Another type, a broad rectangle, presents the dead as a hero, usually at a feast - the 'Death Feast' or 'Totenmahl' reliefs. 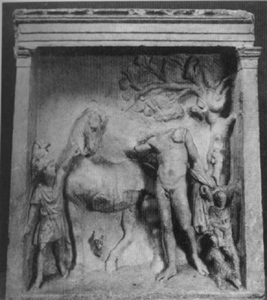 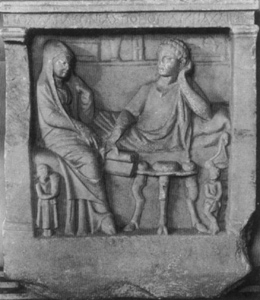