The Hellenistic period in Greece begins with the creation of the Macedonian empire by Alexander the Great, and continues with the mixed fortunes of the successor kingdoms, until the intrusion of Rome: broadly late 4th to 1st century B.C. New palatial patronage has its effect on sculpture and although the sculptors were mobile, some regional preferences or skills can perhaps be discerned. Important centres seem to be Athens, the Macedonian cities, Pergamon, Rhodes, Delos, Syria, and Alexandria. More ambitious architecture attracted major sculptural decoration, and the cult of personality encouraged real portraiture. The idealized realism of the 5th/4th centuries could perhaps go no further, and progress is to be looked for in more robust, sometimes impressionistic versions of the classical forms, often verging on the baroque; but the pure classical was still valued, especially by Romans, and was catered for by the production of copies of classical masterpieces by Greek sculptors and by some original work in the classical, sometimes even archaic, manner.

Some achievements of Hellenistic sculptors are mentioned and illustrated in others sections here (Architectural, Grave Monuments, Votive, Portraiture). The following pictures are chosen to give an idea of the new sculptural styles and their range of uses.

The classical style was retained for statues of gods and goddesses though the latter are rendered more sensuously, if Aphrodite, more substantially wrapped up, if the senior goddesses, while the males reveal their date mainly through the treatment of their intense faces and often wild hair. This is particularly apparent in the treatment of the gods fighting giants on the Great Altar at Pergamon. 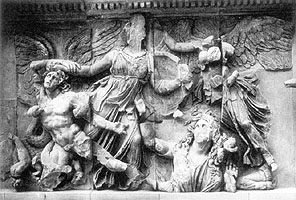 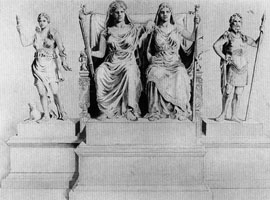 Votive and commemorative monuments may take the form of major groups of figures, not set like friezes in the classical manner but disposed more three-dimensionally. The most spectacular of these were copied in the Roman period, notably for the Emperor Tiberius' sculpture grotto at Sperlonga. 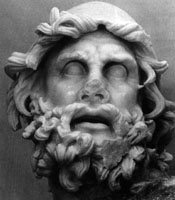 Head of Odysseus in the group (above) from Sperlonga

Niobe and her daughter, from a group showing the slaying of the Niobids by Apollo and Artemis
Cast No. C 195b 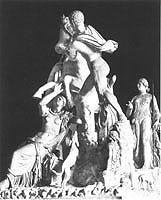 The Trojan priest Laocoon with his two sons, attacked by serpents sent by Apollo. One of the most famous of the Hellenistic (about 200 BC) groups discovered in this copy in Rome
Cast No. B 130b 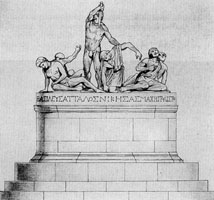 Reconstruction of Victory monument with Gauls - at Pergamon. There was a comparable group of smaller figures set up in Athens to celebrate the same victory

A Gaul killing himself, supporting his dead wife. From a victory monument set up at Pergamon by Attalos in the 220s BC. This includes the famous 'Dying Gaul'

Pan teaches the young Daphnis how to play his pipes

The Victory of Samothrace, placed on the prow of a ship as part of a dedication celebrating a sea victory
Cast No. B140

In the remoter Hellenistic kingdoms pure provincialism reigned, even for royal portraits, where we see only the trappings of Hellenistic statuary, as for the Commagenian kings at Nimrud-Dagh in south Turkey. 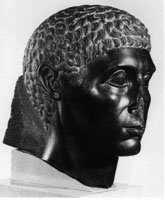 Head of a man, from Egypt. The Ptolemaic kingdom of Egypt is a centre for fine classicizing works, but the far older Egyptian tradition lingered and could be combined with the more frankly realistic Greek in works such as this, which is only superficially Greek 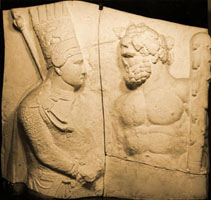 Relief of Antiochos I of Commagene (east Turkey) with a highly stylized Herakles. On the site at Nimrud-Dagh Cast No. A 146

Figure of a woman from Afghanistan.This remote Greek kingdom kept in touch with contemporary developments at home, though this figure shows a very simplified form of the familiar Hellenistic draped women