The closest art form which has been preserved is painting on pottery, and the principal pottery during the period of the great wall-painters is Athenian. From about 600 to 500 the principal ceramic techniques were black figures on a red ground (black-figure), and from around 500 to 300, a reversal of the firing procedure, giving red-figures on a black ground (red-figure).

Neither technique is very realistic, but both are durable and exploit the natural redness of the Athenian clay, rich in iron. 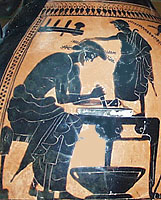 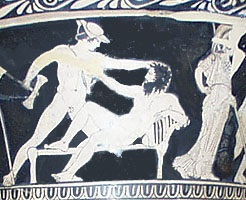 A third technique outlines figures on a ground which has been made white by using a special clay free from the iron oxides, applied over the common reddish clay. This so called white-ground technique (white ground) has quite a long history, but is common only in Athens during the 5th century. It gives a more realistic effect than black- and red-figures and permits the addition of colours ranging from yellow to pink, red, violet and blue - and probably comes closest to painting on panels and walls. The technique of draughtsmanship is, however, usually the same as red-figure.