The ancient sources describe advances made in the art of painting, and some can be paralleled, broadly, on Athenian pottery. Here are a few examples, in chronological order. Until about 520 BC the human figure was depicted as it had been in all earlier two-dimensional art, in profile, or, less commonly, in combination of profile and frontal views. Then, on some large well-made clay shapes a few painters experimented towards the end of the 6th century with more realistic poses, attempting to show the human body as it was in life, not stylized as it had been in art.

They also attempted to show it in movement. In the ancient sources (Pliny, Natural History 35.55-6) a man named Kimon from the town of Kleonai, is said to have invented three-quarter views at this time, showing figures in various poses, looking up, down, backwards, etc., with parts of their bodies clearly articulated - bones and muscles, even veins - and drapery with folds and creases. Similar advances can be seen in sculpture, particularly in low relief, from roughly the same time, but the initial steps towards artistic change may well have come from the draughtsmen.

In the middle of the 5th century a small number of fine, large shapes have figures disposed on different levels, not on a single groundline as in earlier art. At this time the ancient sources tell us that one of the most famous Greek painters, Polygnotos, from the northern Greek island of Thasos, introduced figures on different levels in paintings which he executed on the walls of some of the most prestigious buildings, at Delphi and Athens. 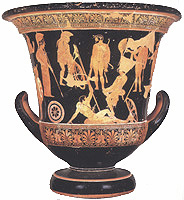 At the end of the 5th century they tell us that Parrhasios and Zeuxis, the greatest painters of their time, introduced new techniques. The former is said to have used outline in new ways which achieved greater realism, the latter shading. These technical advances, as fundamental to later western painting as the abandonment of the rigid profile view at the beginning of the century, can be paralleled on some exceptional white-ground pottery dated on independent criteria to around 400 BC.