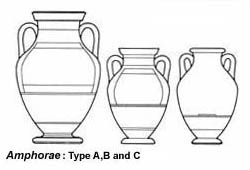 We rarely know the ancient name of the shapes, even though we have contemporary literature. Pictures painted on the pottery can provide the most reliable clues for linking function to form.

Shapes display continuity and a remarkable degree of homogeneity over a long period. Even in 5th century Athens, at the peak of 'fine' production, there are barely more than 30. Of these less than half are common. Overall there is only modest variety in technique, design and decorative elements. Figures dominate; they are usually human, and they are usually framed by patterns which, though varied, derive from a modest range of component elements. The overall consistency, which is due to large-scale, and fairly sophisticated, production, and the large number of examples preserved, helped Sir John Beazley, among others, to classify the material. Beazley was so meticulous in recording details about Athenian figure-decorated pottery of the 6th through the 4th centuries that it could be transferred to computer with minimal change.