Although the range of vessels gathered here is diverse, they all have a similar function as containers for personal use, an impression supported by their depictions on vases and other media. Many are small too, suggesting that they could have held precious commodities, such as (perfumed) oil. The lekythos and aryballos are well-established in early black-figure, and various forms are developed over time. The shape of the alabastron varies little. It only becomes popular among Athenian potters from the mid-sixth century, although earlier examples can be found in Corinthianware. Decorated askoi are preserved only in red-figure, from the early fifth century. Also considered here are a number of shapes, generally without handles, that may be grouped under the terms pyxis and exaleiptron. The latter covers the kothon and plemochoe.

The aryballos (pl. aryballoi) has a small round or ovoid body and a narrow neck. The typically broad and flat lip prevents spillage. The use of the Greek term aryballos for this particular shape is a modern convention. It may well have been used in antiquity, but we know that other names, such as lekythos, were also applied. 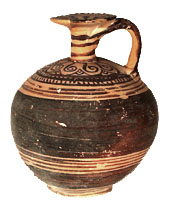 Aryballoi are common in Corinthian ware, some being tiny and meticulously decorated. Examples are less widespread in Athenian, although the shape is depicted on vases or funerary stelai, either hanging up, often with a strigil or sponge in an athletic setting, or being used by the athletes themselves.

In Corinth and East Greece, warrior's heads, animals, and other mould-made figures could serve as the body of aryballoi. Athenian potters sustain the habit, and there are examples in the form of female heads, shells, even genitals.

Like the aryballos, in that it has a narrow neck and a single handle, the lekythos (pl. lekythoi) is generally a taller vessel with a small, deep mouth. The Greek word lekythos was undoubtedly used for the various forms considered here, although it does appear that it was used for oil-vessels in general.

In the early sixth-century, the lekythos has an oval-shaped body, but as with the hydria and neck-amphora, a shouldered-type is developed around the middle of the century. This form, with a tapering body, continues to be decorated by black-figure painters. But it is the cylindrical type, first preserved from the last third of the sixth-century, that will be predominant in the fifth century, and it is this form that is decorated with polychrome figures on white-ground. Fragmentary examples (and X-ray photography) reveal that some had a smaller inner chamber, to limit the volume of oil that could be held.

The role of the white-ground (cylindrical) lekythoi in funerary ritual is made clear both by their excavation from cemeteries and their depiction, invariably on lekythoi themselves, standing or fallen over at the graveside. Late in the fifth century, some massive examples of the shape are produced ('Huge Lekythoi'), serving perhaps as equivalents for stone grave-markers.

The broad-footed squat lekythos lacks the sharp shoulder of the cylindrical type. It begins to be made late in the fifth century.

The alabastron (pl. alabastra) is a long-bodied vessel, with a flat disk for the mouth and a rounded bottom. It is handleless, although some examples have eyes or lugs by which thread could be attached. The shape has a long history in Corinth, but is only preserved in Athenian pottery from the mid-sixth century. Examples of the shape have been found in a range of materials, including alabaster. The Greek term for this stone - alabastron (probably of Egyptian origin) - probably reveals the inspiration for the shape, and many examples are covered with white-ground, as if to imitate the stone. It seems primarily to have been a vessel for perfumed oil, as indicated by scenes on vases depicting it in use, e.g., by women after bathing.

The Athenian askos (pl. askoi) is a small, round vessel with a flat bottom and an over-arching handle that joins the obliquely-angled neck. There is little room for extensive decoration, and often a pair of figures suffices.

The Greek word askos refers to the bags made of animal-skin that were used to carry wine; in Athenian red-figure scenes, they are often depicted in the arms of satyrs. Its modern application to this pottery-shape originates in the supposed similarity of some examples to animal-skins.

The pyxis (pl. pyxides) is a small round box, probably used for storing trinkets, ointments or cosmetics. The type can be traced back to Geometric examples, which are often topped by horses, but the most common black-figure shape seems to have been borrowed from Corinth. In red-figure, pyxides are regularly decorated with scenes of female activity, and the shape is shown in feminine contexts. Contemporary references to vessels of this sort use the word kylichnis, and the term pyxis is found mainly after the fourth century B.C. However, its connection with the Greek pyxos - boxwood, may reveal something about the shape's material origins, and examples of the shape can be found in other media, such as stone.

Another type of container is the exaleiptron (pl. exaleiptra) which may have been used primarily for liquids (compare the Greek exaleipho, - wash over, anoint). It is not entirely clear to which specific shape, if any, the term refers, and in modern literature other Greek names such as kothon or plemochoe may be used.Typical however is the cylindrical form of the body and an incurving lip that would prevent spillage of the contents whilst carrying. In the sixth century, some may have three (often decorated) feet, but later examples tend to have a high splaying foot. They are carried by women as they approach the grave on white-ground lekythoi. 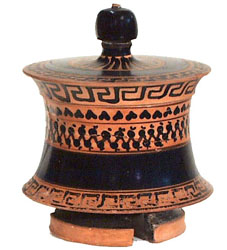 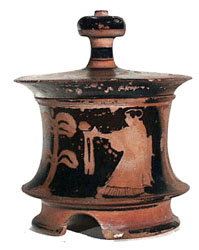 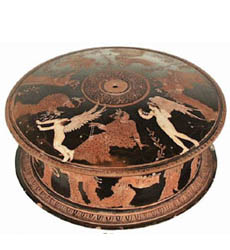 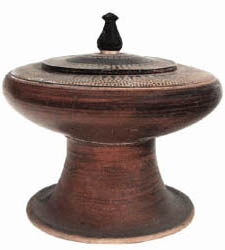