Consistent features for drinking cups during the sixth to fourth centuries B.C. are the relatively shallow shape, a foot that is connected to the bowl by a stem (except in the case of stemless cups) and two handles. The Greek name kylix (pl. kylikes) seems to have been used for the shape in antiquity, although it was probably applied to other drinking vessels too. Modern classifications such as Komast-, Siana-, Little Masters, and Types A, B, and C are useful for bringing to light the general course of the shape's development, which is broadly chronological. But not every example fits neatly into each type, and scholars have identified further variants, such as Cassel and Droop cups. In all cases, the handles are horizontal, often swinging upwards. Handles that meet at a point, such as those found on so-called Merrythought cups, are named 'wishbone handles'after the skeletal feature that they resemble.

Deeper vessels, such as the skyphos, mastos and kantharos, are also considered here, as are the rhyton, head- and figure-vases. Many are depicted in use, most obviously in symposium scenes. In particular, the kylix is used for the game of kottabos, which involved flinging the dregs of one's drink at a target. 'Mugs' are discussed under pouring vessels, but phialai are included here, for they were occasionally used as drinking vessels.

The earliest type of Athenian black-figure cup, adapted from Corinthian potters. Its lip is narrow and sharply angled from the body ('offset'). The foot is short-stemmed and flaring. The name derives from its regular decoration with representations of komasts, who also can be found on earlier Corinthian vessels.

Named after a site on Rhodes where examples were found, Siana cups can be distinguished from Komast cups by their taller feet and lips. They are decorated on the interior (the tondo), another difference from Komast cups, and there are two schemes for decorating the exterior. The 'double-decker' type involves two friezes on each side, one on the lip (usually floral), and a figured scene on the body. The 'overlap' type uses a single frieze on each side to cover the total height of the body and lip. Aspects of the form and decoration of Siana cups appear to be indebted to East Greek models.

The term 'Little Master cup' is a translation of the German Kleinmeisterschale, alluding to the small scale of the decorative elements. It has a high-stemmed foot and an offset concave lip. Examples are divided into two categories; lip-cups and band-cups.

Although there are differences of shape - the lip is more obviously offset on a lip-cup than on a band-cup - the most obvious distinction is in the scheme of decoration. Band-cups are painted black save for the handle zone, which contains a decorated frieze, whereas lip-cups are largely plain save for the line that divides the lip and the body. In the handle-zone there is often an inscription and occasional decorative elements, while the lip may carry a single figure (often a bust) or a small group.

Developed in the third quarter of the sixth century, Type A cups do not have an offset lip, and their profile runs smoothly from the rim to a fillet at the junction between the bowl and the short flaring foot. Examples are decorated in both black- and red-figure, and some are 'bilingual', but production ceases by the early fifth century.

Like those of Type A, Type B cups lack the offset lip, but also the fillet at the top of the stem. The resulting profile is a flowing curve.

Less common than Type B cups, these sometimes have an offset lip. There is a moulding low down on the stem. They are frequently painted entirely black or decorated only on the interior.

These cups lack a stem, and the foot is connected directly to the bowl. Most examples are painted all over with black-glaze.

The skyphos (pl. skyphoi) is a deep-bowled drinking vessel with a low foot and two short handles that are usually horizontal. It is regularly depicted in symposium scenes. Shallower versions of the shape, with a concave lip, are termed 'cup-skyphoi'. In the fifth-century, some skyphoi have a vertical handle. These are regularly decorated with an owl, an Athenian symbol, from where the name glaux (Greek for owl) is derived.

A variation on the shape, the mastos (pl. mastoi; Greek mastos - breast), is named for its breast-like shape, which terminates in a nipple. Examples with a flat base and offset lip are termed 'mastoid cups'.

The kantharos (pl. kantharoi) is a deep vessel with two distinctive high handles. The stem of the foot is often tall. The form can be traced back to the eighth century, and kantharoi - perhaps metal versions- are frequently depicted on black- and red-figure vases, held by Dionysos or Herakles. Although the name is ancient (Greek kantharos - dung-beetle), it is not clear how precisely it was connected with this shape, and it seems that kotyle could have been used as well.

In the fourth century, the 'cup kantharos' is common. Its handles project horizontally, and do not return to join the body.

Rhyton (pl. rhyta) is a term applied to a drinking-horn, through which liquid may be poured (compare Greek rhysis - a stream). The shape originates in the Near East, where it may be elaborated by rendering the spout in the form of an animal head. Examples seem to have inspired Athenian potters to make their own versions. In many cases, the animal-head no longer serves as an orifice (the vessel is used as a cup, rather than for pouring), but the term rhyton is often used today nonetheless.

The animal head, such as a ram or mule, is mould-made and attached to the bottom part of the cup. The addition of mould-made heads is not confined to drinking vessels, and neither are the heads only of animals - female, satyr or African heads can be found for aryballoi and oinochoai too (these may be termed 'head-vases'). In some cases, two heads may be juxtaposed back-to-back ('janiform'). Occasionally the terracotta attachments may be in the form of complete figures, such as the riding Amazon or African mauled by a crocodile associated with Sotades (these are termed 'figure-vases'). 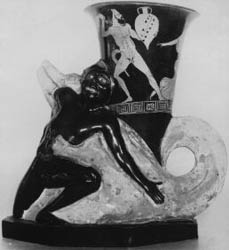 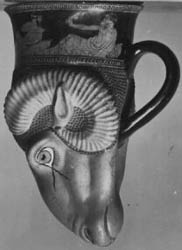 Pottery examples of the phiale (pl. phialai) are relatively few. It is a metal shape, and the application of the name to the shallow dish lacking handles is certain. Those with a central depression on the exterior that rises up as a boss in the centre of the bowl are described as mesomphaloi. From depictions of the shape in use - most typically for making libations - we can see that it was held with the palm outstretched and the middle finger reaching into the exterior depression. 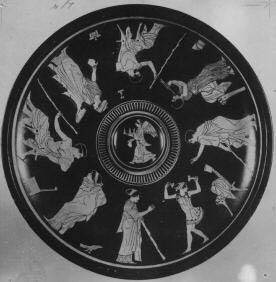