A range of pottery shapes could be used to distribute liquid from a large mixing bowl. These fall under the term oinochoe; the olpe and chous are modern sub-categories. There were no doubt alternatives in other media - some vases show a long-handled ladle being used - and some of the pottery shapes, or certain features, can be paralleled in metalwork. Also considered here is the kyathos, a single-handled ladle-like vessel.

The term oinochoe (pl. oinochoai; Greek oinos - wine and cheo - I pour) is appropriate to this shape and illustrations of it in use, and appears to have been used in antiquity. It is a single-handled vessel, usually taller than it is wide. Beazley identified ten types, based on variations of profile, mouth-type - such as trefoil (like an ivy leaf), round or beaked - and handle-form. One such is the chous (pl. choes), a plump shape with a smooth profile and trefoil mouth. Miniature versions are often found in children's graves, invariably decorated with scenes involving young children. They were probably used in Athens during the Anthesteria. On the second day of the festival, named Choes, the newly-opened wine was drunk. 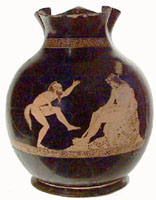 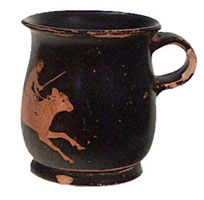 The olpe (pl. olpai) is distinguished today from oinochoai. It is tall in relation to its breadth, with a smooth profile and a high handle. Examples occur from early on in black-figure. The name is ancient, but there seems to be little basis for applying it to this particular form. The 'oinochoe of Type 8' may also be called a mug in modern literature, after its spoutless rim and short size, and may have been used for drinking. Like other oinochoe-types, it may also have served as a measure.

Developed in the second half of the sixth century, most probably in the workshop of Nikosthenes, the kyathos (pl. kyathoi; compare the Greek verb, kuein - 'to contain') is a small dipper, with a single high handle and low foot. It seems that the shape was copied from Etruria, and, like the Nikosthenic amphorae, serves as a likely example for the targeting of a particular market by Athenian potters. The name seems to be correct for this shape, although it also occurs as a measure. 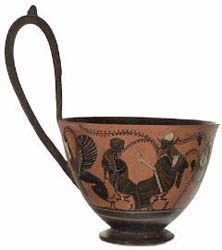