Gathered here are further vessels that were used for carrying and storing liquids. All can be seen in use on Athenian painted pottery. The lebes is differentiated today from kraters, although it too could have been used as a mixing vessel. A particular form, the lebes gamikos, is regularly found in contexts associated with marriage. Another vessel for liquid that is found in the context of religious ritual is the loutrophoros.

Two further shapes - one old, one new - are important liquid-holders. The hydria, identified by its three handles, two horizontal and one vertical, and the stamnos, possibly of Etruscan derivation.

A lebes (pl. lebetes; Greek lebes - bowl) is a deep bowl, usually handleless and with a low neck. The shape is one of the oldest in Athenian black-figure, and continues to be made into the fifth-century. It has no foot, but may be mounted on a stand. In vase-paintings, the shape is shown in use as a mixing-bowl in the symposium. Lebetes are also preserved in metal, and the shape can be incorporated into a tripod. There are many references to lebetes as prizes. The Greek word dinos (pl. dinoi) is sometimes used today for the shape, but is not known securely for it in antiquity.

A version with upright handles, a lid, a more distinct neck and often made in one piece with the stand is known today as a lebes gamikos (pl. lebetes gamikoi; Greek gamein - to marry). Examples continue to be made into the fourth century. It is usually associated with marriage rituals, both in excavated contexts and as depicted on vases, including the shape itself. 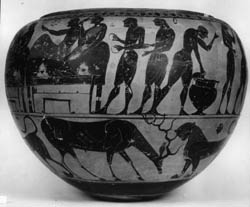 The loutrophoros (pl. loutrophoroi) is an ovoid-bodied vessel with a tall neck and two or three handles (hence the terms loutrophoros-amphora and loutrophoros-hydria), used for carrying and storing water. Examples can be traced back to the eighth century. The use of the term 'loutrophoros' for vessels of this shape is modern; in antiquity it probably referred to the person responsible for carrying the water (Greek loutron - water for bathing, phero - to carry).

The illustrations on vases regularly suggest the settings in which the vessel was used - marriage and funerary rituals - and excavated examples, as well as images of the shape on other vases, support these contexts. Later in the fifth century, the shape was carved in marble for Athenian cemeteries.

An old shape, with precursors in the eighth century, the hydria (pl. hydriai; compare Greek hudor - water) is a water-jar with three handles, two for carrying and one for pouring. The application of the name to the shape is reasonably certain, although such vessels were not only used for the carrying of water. We know, for example, that hydriai held votes in ballots and ashes in cemeteries. 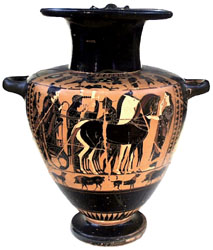 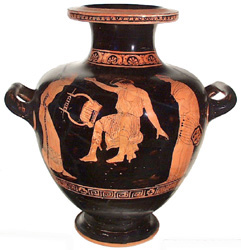 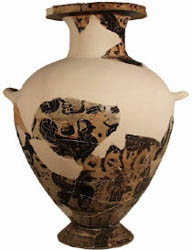 The hydria is found in a variety of forms in black- and red-figure, as well as in metal. In early black-figure, examples are round-bodied, with horizontal handles about halfway up. By the mid-sixth century, the sharply-shouldered type has been developed, often decorated in three zones - the shoulder, the body and the predella.

Examples are found in red-figure as well as black-, but the more typical red-figure shape is round-shouldered. It was invented in the late-sixth century, and over the course of fifth and fourth centuries becomes slimmer, and its handles more tightly curled. The Greek term kalpis (pl. kalpides) is often used today for this version, although it is not clear whether it had the same association in antiquity.

The stamnos (pl. stamnoi; possibly connected with Greek histemi - I set up) is a broad-shouldered, round-shaped vessel, with a low foot and a low neck. Its two horizontal handles usually curl upwards to some degree. It is produced from the late sixth century into the later fifth. Most have been found in Etruria. The name might have been used for this shape in antiquity, but not necessarily exclusively, and it may also have been applied to other storage vessels, such as amphorae.

Some examples have lids, suggesting that they were used for storage. From illustrations of the shape in use, it is clear that stamnoi could also be used for the serving of liquids, and may be considered alongside lebetes and kraters. 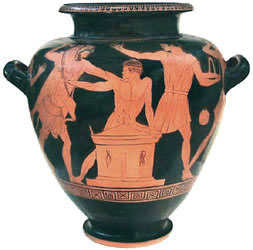