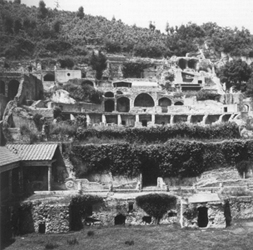 During the 1950s archaeological excavation in the area around Naples, at Baiae, revealed the remains of a 1st century AD manufacturer of plaster casts of Greek statues for wealthy Roman patrons. Many of the moulds found at Baiae were from statues that we still regard highly today. 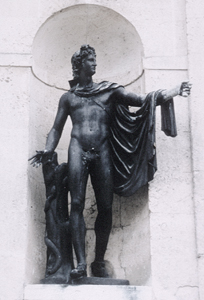 A famous statue, often copied, is the marble Apollo Belvedere. Recorded in Rome in the 1490s, it was restored in the 1530s. Most copies preserve the 16th century left forearm and left hand, as does this one at Fontanebleau. A cast of the left hand was found at Baiae in the 1950s. It was probably moulded from the original statue which the sculptor Leochares made in bronze in the later 4th century BC.

The restoration of antique statues is a tradition that began in the early Renaissance and continued into the 19th century. Canova may have declined to restore the marbles Lord Elgin brought from the Parthenon, but Bertel Thorvaldsen thought his restorations would improve the marbles from Aegina which became the pride of Klenze's Glypytothek in Munich. This small plaster model in Oxford (below), of the temple's west pediment, shows the 19th century restorations. The first model was made for the German archaeologist Adolf Furtwängler in the 1880s. 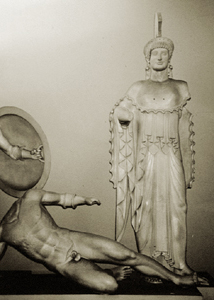 These plaster casts in Oxford of figures from the east pediment show the Aegina marbles free from restoration, as they are now displayed in Munich.