Please help us to improve this site
Are you using this page for:
High school studies in art history?
University Studies?
Another purpose?
Please let us know what purpose:
Continue

The earliest attempts at sculpture in the round take the form of small figures of men, gods and animals in clay or bronze. By the end of the 8th century the influence of Syria begins to be felt, in what is to become an Orientalizing Revolution in the Greek world. This leads, in the 7th century, to stone figures, standing or seated and usually less than life size, which were used as dedications or to decorate buildings. Their form (called 'Daedalic') is broadly Syrian, with a preference for frontal figures, big heads, rather triangular faces. 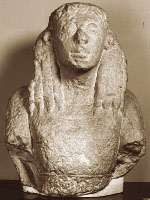 The main source is Crete and the material a soft limestone which did not require too difficult a technique to carve - rather like wood which must have also been a common medium, but has not survived.

In the second half of the 7th century the Greeks became aware of the sculpture of Egypt and were moved to make life size, and larger, figures in hard white marble, which they worked with iron tools (unlike the Egyptians who used abrasion only). The marble was from the Cyclades islands (in the 6th century from other sources, including Attica), where the earliest examples are found. There are two main types - the kouroi, who are naked males (at best, belted) standing with one foot forward, hands to sides:

- and the korai, who are dressed women. They serve as dedications and grave markers. Each type serves to demonstrate the development of sculptural style through the rest of the archaic period.

There are regional variations that can be discerned too - the rather heavy Attic kouroi, the slim, round-headed Ionian, the sleek Cycladic.