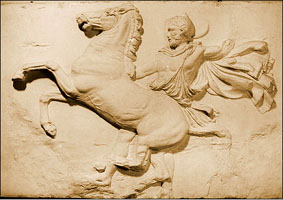 Special notice: are you using this page as part of the Philippines Curriculum? We would love to receive your comments and feedback. Please send us a brief email or contact us by social media (carc@classics.ox.ac.uk)

The sculpture of the Greeks and Romans represents one of the major art traditions of antiquity. It was diverse in its function, decorating temples and public buildings, commemorating the dead, the famous, a victory, or as an offering to the gods. Once it was rediscovered by the Renaissance its styles of idealized realism became the standard for most western art down to the 19th century, and it is therefore highly relevant to our understanding and enjoyment of much that we see around us.

These pages are based on the Cast Collection of the Ashmolean Museum, Oxford, which represents an excellent selection of the most important works in the museums of the world.

What follows is a discursive description of the various main periods of Classical sculpture, giving something of the historical background to each main period and style:

These are followed by separate essays on some of the more important classes of sculpture:

Throughout, reference is made to individual pieces in the Oxford collection, which can be recovered by clicking on their Cast numbers. Links are also available to other useful pages by clicking on highlighted words.