During the first half of the 6th century BC Greek gem engravers learned again how to cut the harder stones (quartzes, mainly cornelian). This seems to have happened through observation of practice in Cyprus, where Phoenicians were established and active, and in a good position to teach. Moreover, the favourite Phoenician gem shape, the scarab, was adopted, or sometimes the plainer version, the scaraboid. The scarab beetles often have raised spines ('carinated') a feature uncommon elsewhere in time or place. The principal archaic shapes are shown in these drawings; they derive from Egyptian via Phoenician but still retain many features of a real scarab beetle.

Abbreviations in this section:

Some early examples with Greek subjects but oriental detail help demonstrate the origins of this series very well. 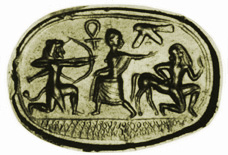 Cornelian scarab from Marion, Cyprus. Herakles rescues Deianeira from Nessos. The cross-hatched area below is Phoenician, as are the 'life sign' and falcon above.

Cornelian scarab. A Greek gorgon with horse body (rare but appropriate for the monster) grapples a lion in a common eastern pose.

Cornelian scarab. A figure like a winged satyr or Bes (an Egyptian/Phoenician deity) but with a lion body grapples a goat in a pose more appropriate to Bes than a Greek satyr.

Chalcedony scarab from Cyprus. A six-winged goddess with winged head and heels carries a sun disc. A greek interpretation of the eastern winged disc.

A few scarabs of the mid-6th century attempt narrative scenes with several figures. For the most part single-figure subjects are preferred, unlike the practice on many eastern seals. 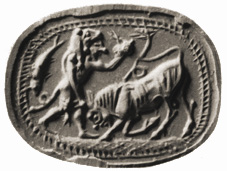 Plasma scarab from Falerii (Etruria). Herakles wrestles with the river god Acheloos, who has a serpent tail, grasping his horn. A dolphin behind, indicating the watery setting. 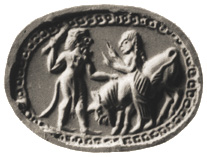 Plasma scarab. Herakles receives the submission of Acheloos, and his prize, his bride Deianeira. An unusual cable border.

The late archaic period (about 525-475 BC) sees the work of the finest engravers, most of them apparently of East Greek origin (Ionian). At this period much of the area was under Persian rule and the example of eastern uses of seals may have been influential but the style is purely Greek as are the subjects. Some important pieces and personalities are chosen here. 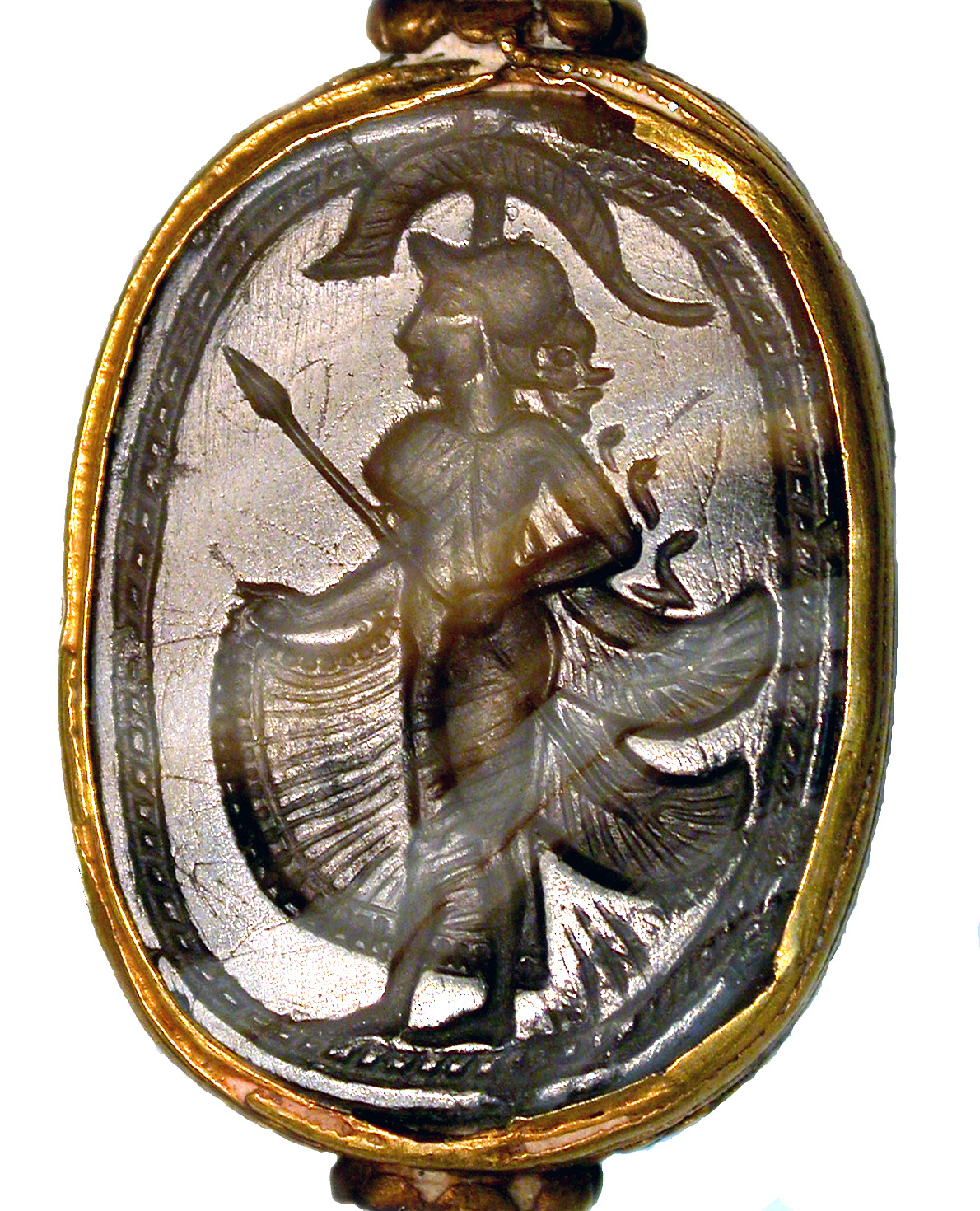 Onyx scarab from Amathus, Cyprus. Athena, with wings and wearing her aegis at her back, the gorgon head replaced by a satyr head. the unusual features (aegis, wings) are Ionian features. 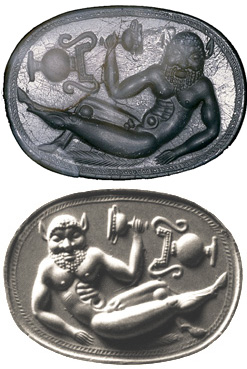 Agate scarab. A reclining satyr holding a cup, a wine jar before him; they are on their side but this is the correct pose for the gem and there is often some ambivalence of pose in this art. The horse feet are Ionian.

Cornelian scarab, with cream signs of burning/weathering. A satyr seizes a sphinx by her hair. The pose is that for more serious attackers in eastern art. 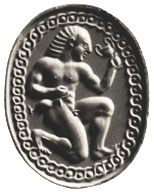 Cornelian scarab. A boy running with a cup and jug. His hairstyle is Ionian, as seen in statuary.

Plasma scaraboid. A collapsing warrior. The frontal/profile legs are a sculptural motif. the figure in free field is well suited to a gem. 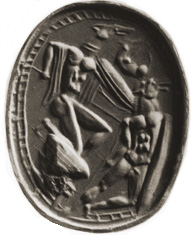 Chalcedony scaraboid. A dog-headed man fights a donkey-headed man; above, a donkey rolling. The animal-head figures are met elsewhere in ionian art. 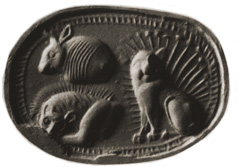 Agate scarab. A lion seated in a papyrus thicket (Phoenician motif), beside foreparts of a panther and bull. 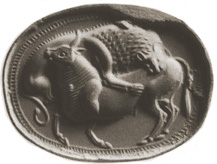 Cornelian scarab from Gela, Sicily. A lion attacks a bull. 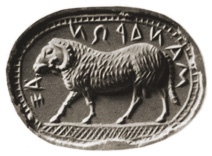 Plasma scarab. A ram; a common symbol of fertility and wealth, with the owner's name Mandronax.

Chalcedony scaraboid from Dimitsana (Arcadia). A sheep, inscribed 'I am of (belong to) Hermotimos'. 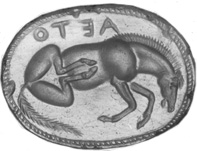 Chalcedony scaraboid. A sow with piglets, a symbol of fertility and wealth.

Few archaic scarabs carry their maker's name. An exception is Epimenes, whose style is distinctive enough for other pieces to be attributed to him. He has an ambitious sculptural style, indulging even in twisting three-quarter figures seen from behind, otherwise familiar only on relief sculpture of the day. 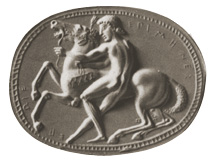 Chalcedony scaraboid from the Nile Delta (Naucratis?) A youth restrains a horse, Inscribed 'Epimenes made [me]'. 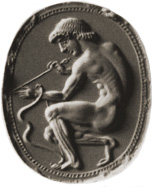 Chalcedony scaraboid from Naucratis. A youth tests the strightness of his arrow, his bow over his arm. Attributed to Epimenes.

Another artist can be identified from several gems carved in very similar style, will full faces and detailed treatment of anatomy and wings, and with a fondness for two-figure fighting or flying groups. He is named the Semon Master, from the owner (?) of one gem.

Agate scarab from the Troy area. A girl, we aring only headband and earrngs, fills her water jar at a lion-head spout. Inscribed 'of Semon'. 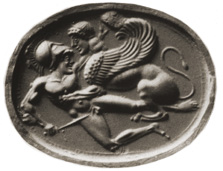 Chalcedony. A sphinx seizes a warrior youth who fights back; a variant on the common theme of the Theban sphinx carryng off a dead youth. By the Semon Master. 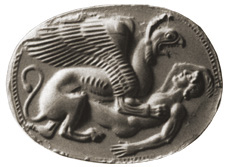 Chalcedony scaraboid. A griffin seizes a naked youth. By the Semon Master.

Cornelian. A winged bull with human face. The monster in this form is oriental, rather than a Greek Acheloos (who is wingless). By the Semon Master.

A number of gems are characterized by careful studies of lions with whiskery manes, such as are also seen on Cypriot coins and others coins of east Greek states. 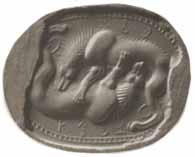 Chalcedony scarab from Beirut. A panther scratches its nose, with a cock and a monkey. Inscribed in Cypriot syllabaray script ka-pa-sa. Group of the Cypriot Lions.

One group of late archaic gems retains the old handcut technique on soft stones like those used for the Island Gems of the 7th/early 6th centuries, and are probably also made in the Greek islands, perhaps Euboea to judge from the lettering of some inscriptions. The technique produces a more sculptural, craggy style than we see on the wheel-cut hardstone intaglios. 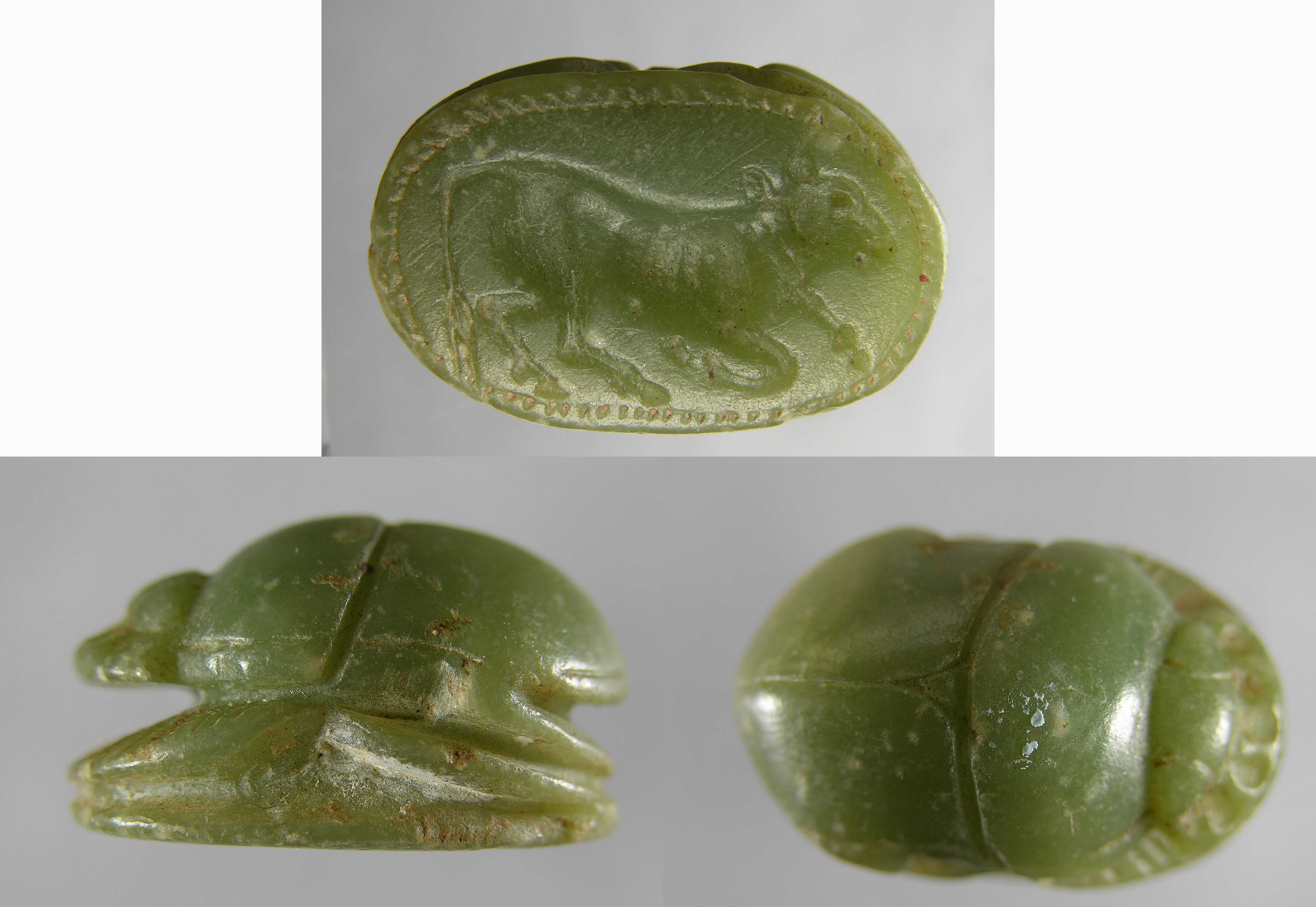 Green serpentine pseudo-scarab; the back is carved as a satyr's head, not a beetle; there are few other archaic Greek scarabs so treated. A man with a kithara mounting a dais (bema). Signed 'Syries made [me]'. Island Scarab. 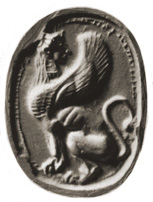 In the very latest style of archaic scarabs the stone is often somewhat larger, presaging classical taste, and the subject conceived more monumentally and often detailed in a manner most easily paralleled in vase painting of the day. These must belong in the early 5th century. 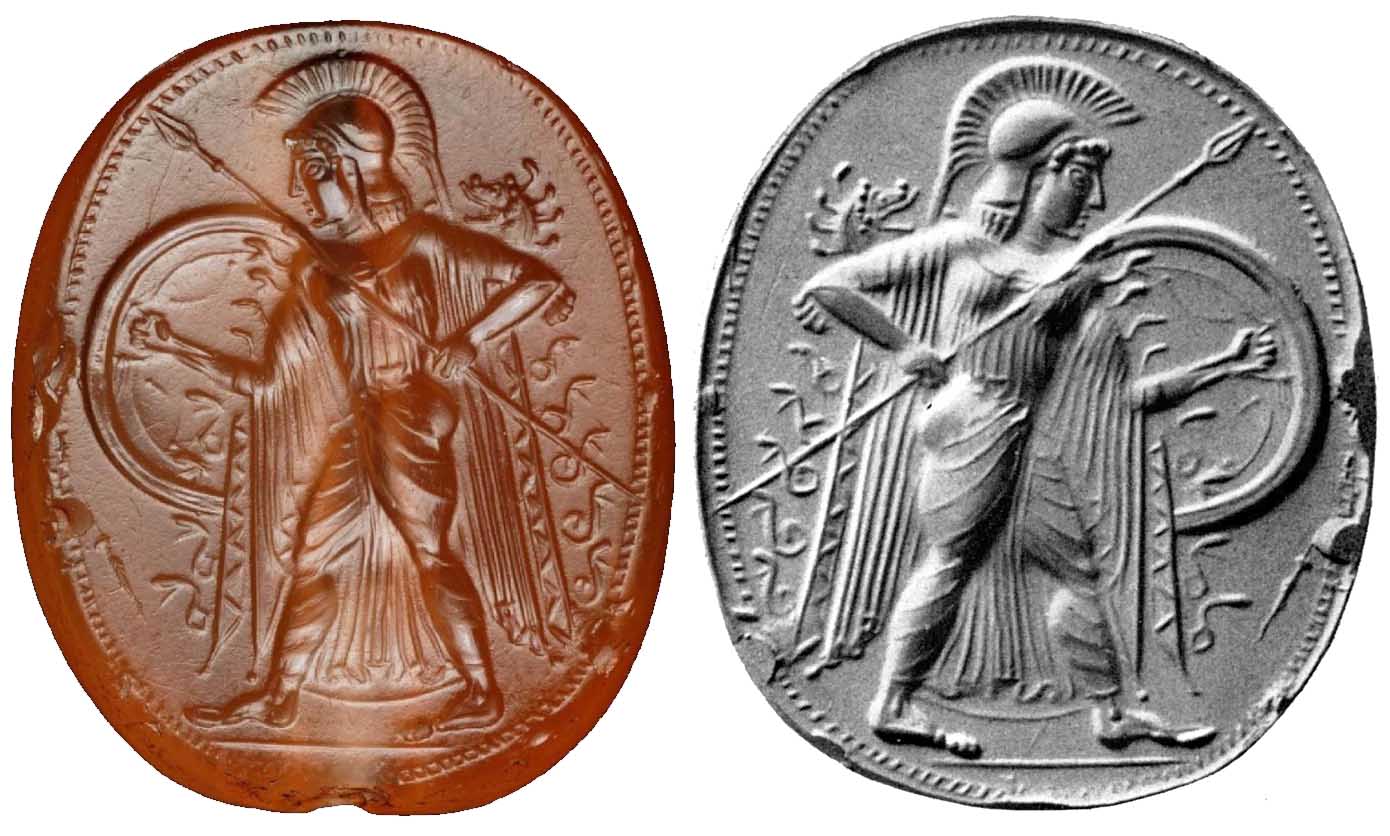 Chalcedony. Athena with helmet, spear and shield. The aigis is slung round her neck and in place of the gorgon head there is the head of a sea monster shown at the back of her neck (compare AGGems no. 237). 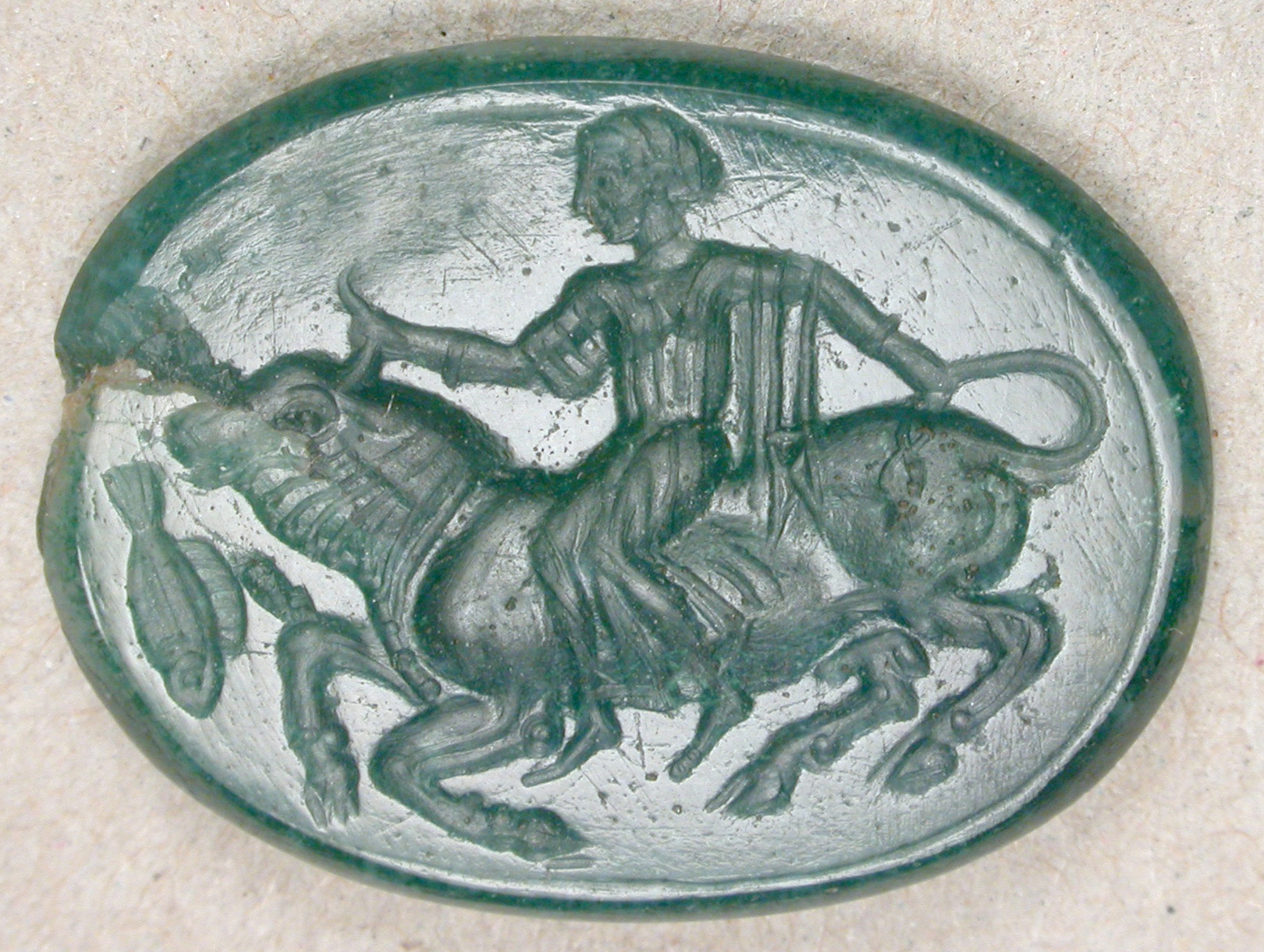 Moss agate scaraboid. Europa rides the bull, steadying herself by its tail and horn.

Cornelian scarab. A bearded satyr, face frontal, ithyphallic, driving a war chariot pulled by two lions, one of which turns its head. (Group of the Beazley Europa) 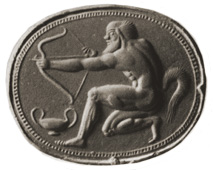 Cornelian scaraboid. A satyr kneels to draw a bow; a cup before him. A warlike satyr is rare but they fight beside Dionysos against the Giants. 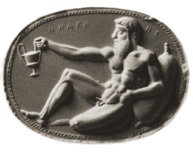 Black jasper scaraboid from near Heraklion, Crete. A satyr reclines on a wineskin, holding out a cup. Inscribed Anakles (owner?). 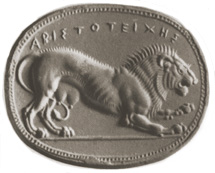 Plasma scarab from near Pergamon. A lioness. Inscribed Aristoteiches (owner?).

Few gems have been found to be inscribed, with the name of their maker or their owner, the latter generally being more conspicuous. They must have been used for sealing as well as being worn as jewellery, on swivel rings or pendants, but few reveal this as well as:

Agate scarab from Aegina. Small dolphin and the inscription 'I am the seal (sama) of Thersis; do not open me!'