Classical gems of the 5th and 4th centuries BC reflect the new realistic styles of Classical Greek art, typified in sculpture, but they also embody a new approach and new usage, being regarded as much as jewellery as for the more practical purposes of sealing. The Archaic scarab shape is not forgotten but the commonest shape is larger, with a plain domed or low back (scaraboid), the patterned border is usually abandoned and the subjects are often single-figure, carefully placed at centre-field. The simplicity disguises some extreme technical competence in rendering of form and detail, typified in the work of one artist, Dexamenos, who has left his signature. The stones are still pierced, as for suspension or fitting to a finger ring, but on some it is the convex back that is decorated, not the flat base, and this presages the usage of the Hellenistic period. The influence of the classical style is felt also in the rich series of Greco-Persian gems. The materials used are mainly chalcedony, notably the pale blue which is also favoured for the Greco-Persian series, jaspers, and for a while multi-coloured jaspers which are attractive for their variegated appearance although this seriously interferes with viewing the subjects engraved, except in impression.

There is a rich repertoire of domestic and wild animal subjects on classical gems, probably mainly for decorative purposes. 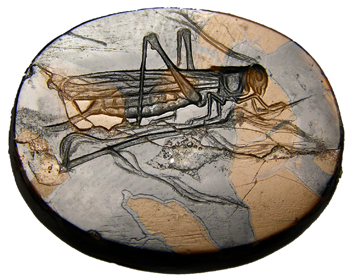 Mottled scaraboid. A locust on a twig stripped of foliage. There is a rich variety of insect life shown on gems in the later 5th century. 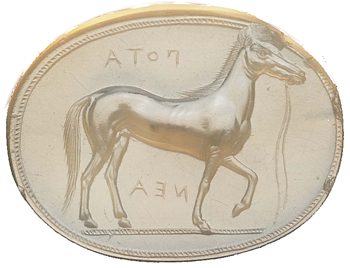 Chalcedony scaraboid from Messenia. A horse with loose reins. Inscribed pota nea. The neat hatched border and ground line are an archaic touch. 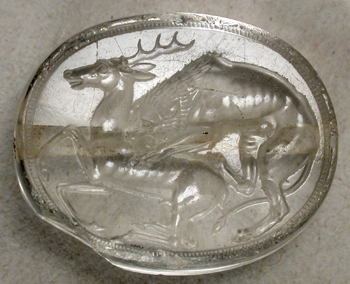 Rock crystal scaraboid. A lion attacking a stag, with a hatched border. 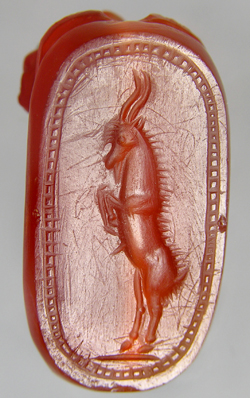 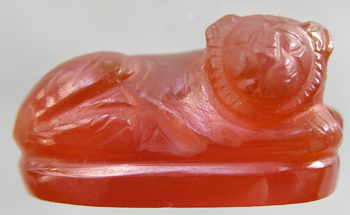 Cornelian lion gem (a rare shape, see GGFR 205 for other examples). A rampant goat, with a hatched border. 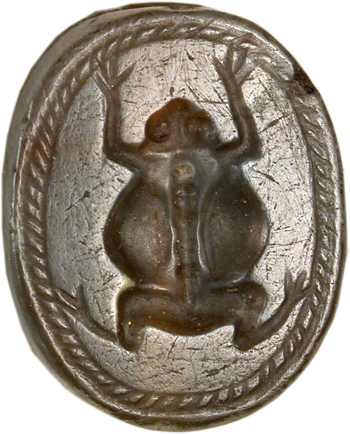 Smoked agate scaraboid. A frog with legs displayed – as seen from above, with a hatched border.

The master Dexamenos, of Chios, signs four gems, and others can be assigned to him for their style and command of detail, sometimes engraved by hand and not by the cutting wheel. He worked in the third quarter of the 5th century, and seems to have had a fondness for mottled jaspers for his work. 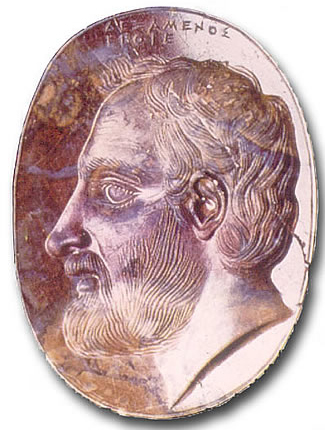 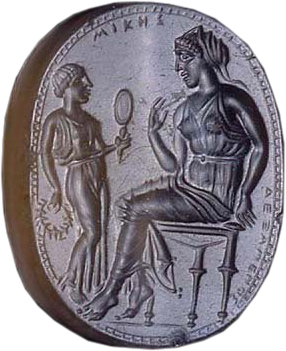 Sapphirine scaraboid. A seated woman attended by her maid with a mirror and wreath. Inscribed with a woman’s name (Mikes) and the engraver’s (Dexamenos). 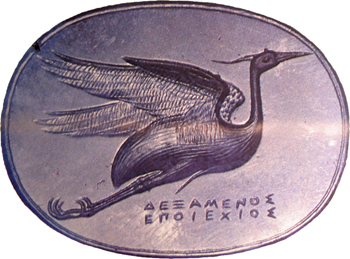 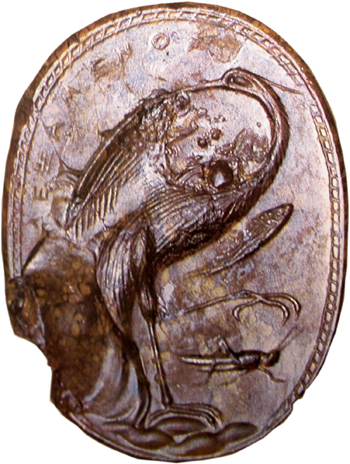 Mottled jasper scaraboid, from Phanagoria (Taman Peninsula). A heron preening and catching a locust with his foot. Signed Dexamenos.

Apart from studies of woman, the generic studies, presaging a Hellenistic interest, belong mainly to the 4th century.

Agate ‘sliced barrel’ shape. A young boxer adjusts the straps on his wrist. Attributed to Dexamenos, for the form of the head. 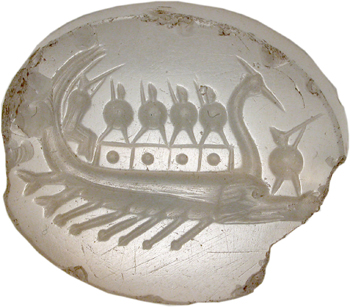 Chalcedony scaraboid. A warship with hoplites standing on deck. 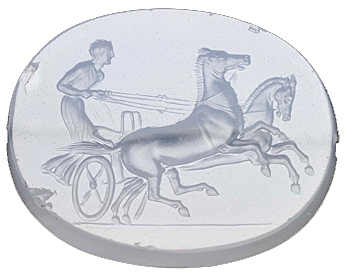 Chalcedony scaraboid. A two-horse chariot, as for a race.

Action scenes are rare, except where the story can be told in two figures. There are several studies of individual gods, either representing tutelary deities for the wearer or sometimes for dedication. 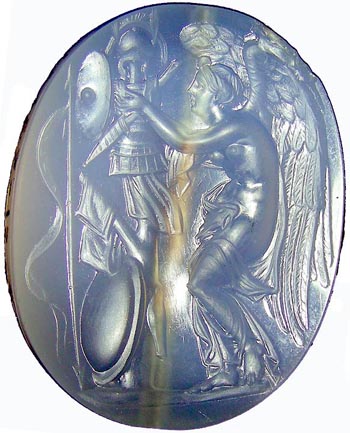 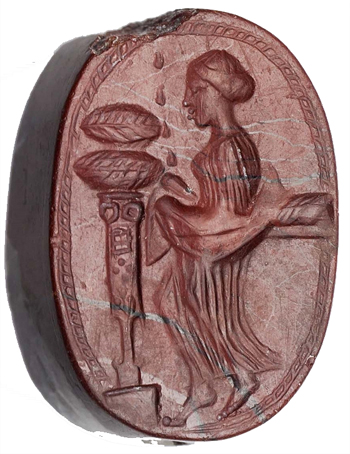 Red jasper scaraboid, from Greece. Danae stands by her bed, holding out her dress to catch the golden rain sent by Zeus to impregnate her. Early classical. 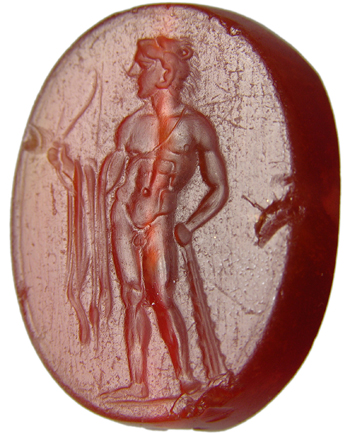 Carnelian scaraboid. A young Herakles, wearing the lionskin cap (the rest of the skin draped over his arm), holds a strung bow and leans on his club. 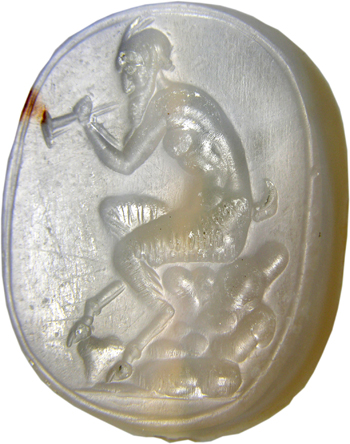 Pale blue chalcedony scaraboid. Pan seated on rocks playing the double pipes. One of the earliest Pans on gems.

While the heroic subjects are not forgotten, the new role of gems as jewellery, no doubt usually worn by women, encourages many new subjects depicting naked or near-naked women, Aphrodite types which might flatter the wearer. 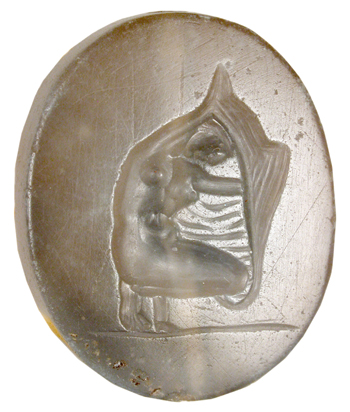 Blue chalcedony scaraboid. A naked woman struggles into (out of?) her dress. 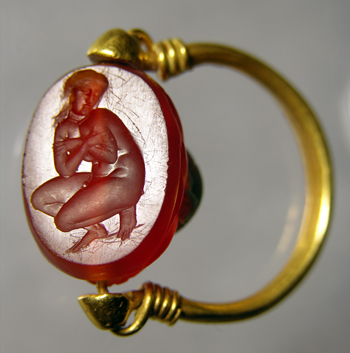 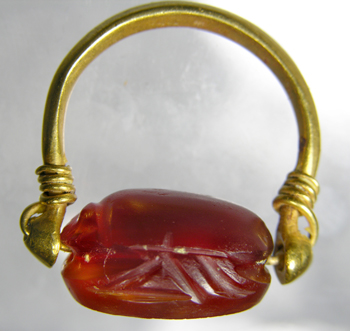 Cornelian scarab. A naked woman kneeling with her arms crossed over her breasts. 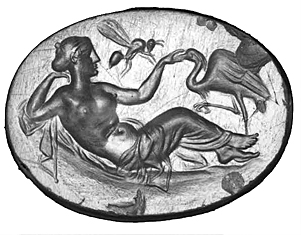 Chalcedony scaraboid. A naked nymph plays with heron, a flying ant above them. 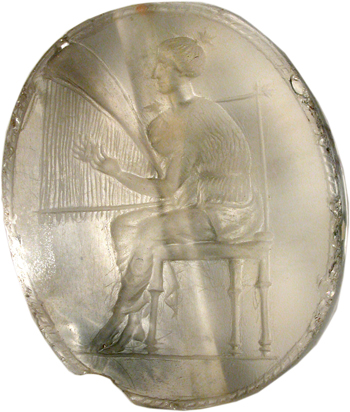