The earliest known inscriptions in the Greek alphabet can be found on Greek pottery and date from the mid-eighth century BC.

They can be painted on the surface of the clay (dipinti) or incised into it (graffiti).

Words run both left to right and right to left (retrograde). The quality of the lettering generally corresponds to the quality of the draughtsmanship. Spellings are not always correct, but the writing on pottery implies a degree of literacy among both producers and consumers. There are even scenes of boys learning to read. 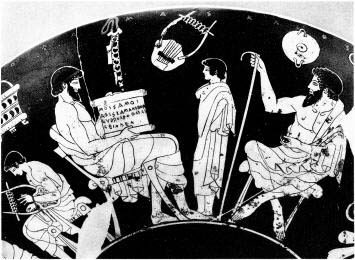 Inscriptions can be grouped as follows:

There are also many 'nonsense' inscriptions. These are meaningless combinations of letters, or even formless shapes, that seek to imitate the decorative effect of literate inscriptions. 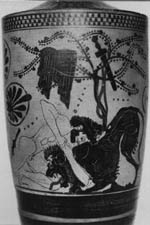 Inscriptions that declare ownership of a vessel are usually incised onto the surface, and like dedicatory inscriptions, belong largely to the realm beyond the potter's quarter.