Even more influential in the diffusion of antique art was the establishment in Paris of the atelier de moulage, seen below, in an oil painting of 1884. Plaster copies of the famed sculptures could be made and distributed widely. 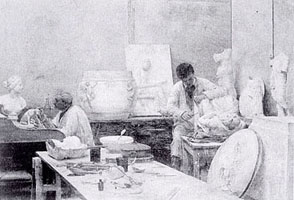 Just as rich and powerful Europeans used copies of antique sculpture to flaunt their importance George Washington thought some busts of great military men of antiquity would enhance his image.

Thomas Jefferson had grander plans for his home at Monticello, where he envisaged a sculpture gallery like those in English country houses. 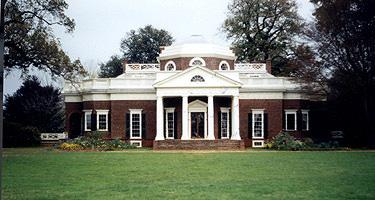 It was, however, the great men of the city of Philadelphia who ordered a large number of casts from the atelier. They thought a cast collection like the Duke of Richmond's in London would improve American culture, but their enlightened views met unexpected opposition.

The strong puritanical views of Americans considered the display of the human body unclad to be immoral. The British painters who had brought some casts to New England much earlier had also discovered that the Most Beautiful Statues, such as Venus de'Medici, needed to be kept in a cupboard to avoid scandal.