During the second half of the 19th century what has been called the age of the dilettante gives way to the academic study of classical archaeology. 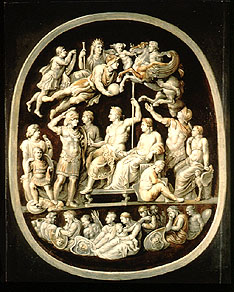 Until the end of the 18th century antique art was equated with sculpture. Although other types of classical antiquities, such as coins and engraved gems, had been known for centuries, collected, and sometimes even copied, they were treasures for private cabinets of the wealthy. Rubens, for example, had collected gems and cameos. He reproduced gemma Tiberiana, in this painting now in Oxford for his friend, the great Provencal scholar Peiresc. One of the first classical antiquities recorded in northern Europe, the gem has been in the Sainte Chapelle since 1341, and in France since 1247.