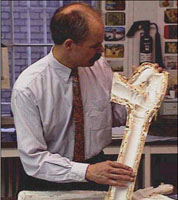 A question often asked by visitors to the Cast Gallery is: "How are casts made?" A traditional method of making casts, which is still practised in some places today, uses a mould made entirely of plaster of Paris. Also, in the 19th century, gelatine moulds were sometimes used. More modern methods employ such materials as silicone rubber and polyurethane. Most of the casts to be seen in the Ashmolean Museum Cast Gallery were made using the traditional plaster method, which is a skilled process requiring much experience. In Paris, for example, an apprenticeship of six years must be served in order to become a cast maker. 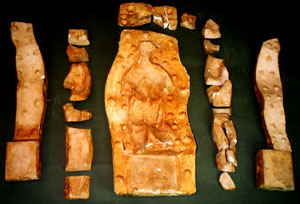 Before a cast can be made, it is necessary to make a mould of the object you wish to copy. The object could be a sculpture or another cast. A traditional mould is made of plaster pieces which together are called a "piece mould". The picture shows one that has been disassembled. To make such a mould, plaster is applied to the object, a small amount at a time, so that an interlocking three-dimensional jigsaw is built up around it. The pieces of the mould are separated by a thin layer of shellac lacquer to prevent sticking. The plaster pieces are then removed from the object and reassembled when it is time to make the cast. The inner surface of the plaster pieces are also coated in shellac before a cast can be made. Large moulds may take up to a year to make, but they can be re-used many times - some have been in use for over a hundred and fifty years. 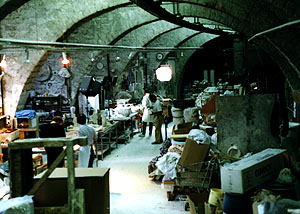 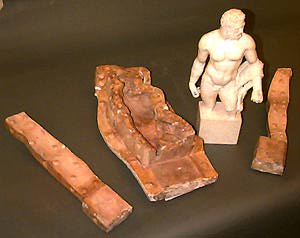 The pieces of the mould are fitted together and a metal armature is inserted to strengthen the final cast. The cast is made by carefully pouring plaster of Paris into the tightly assembled piece mould, which is turned and moved to prevent the formation of air bubbles. After 45 minutes the pieces of the mould can be removed and the plaster cast left to dry. 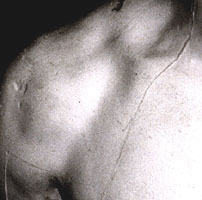 Fine lines can normally be seen on the surface of casts made from piece moulds. Lines appear where the individual sections of the piece mould join together. The tighter the joins, the finer the lines and the better the cast. These lines, also called "flash lines", were sometimes carefully removed in the workshop. 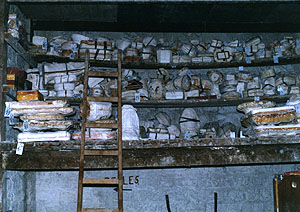 Once made and used for casting, moulds are carefully numbered and stored in dry conditions against the day when they may be used again.

A modern method of casting

As with traditional methods of cast making, before a cast can be made, a mould of the original must be taken. The following example shows a mould being taken from a plaster cast of an original, using a modern method of moulding in Oxford, and a new cast being made from this mould.

The picture on the left below shows Oxford's plaster cast, taken from the statuette in Athens, without its right arm, column and winged Victory. The central picture is of a complete cast from the same statue belonging to the Berlin State Museum which was borrowed by the Ashmolean Museum in 1993. The right hand picture is of the Oxford cast after restoration.

A very thin layer of acrylic resin was applied to the Berlin cast to protect it from any possible damage, then silicone rubber was brushed over its surface.

Modelling clay was used to make a barrier between the two halves of the mould. When the first coat of silicone rubber had dried, a second, thicker coat was applied with a spatula. 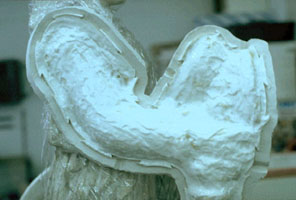 The edges of the silicone rubber were cut at several points to make tabs. These were used later to lock the pieces of the mould into place.

Plaster of Paris was applied over the silicon mould to form a hard outer casing or 'mother mould'. The plaster was made stronger by the addition of strips of cloth.

The two halves were separated by a very thin layer of clay. Transparent plastic sheeting was used to protect the cast from any splashes of plaster. 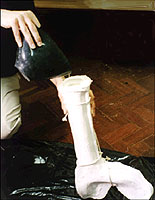 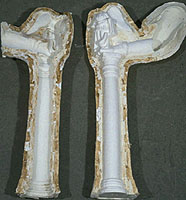 When both halves of the mould had been formed and removed from the Berlin cast, they were fitted together and filled with plaster of Paris. After about 45 minutes when the plaster had set, the mould was opened and the new cast removed.

Finally the new arm, column, and Victory were fixed in place with metal pins and the restoration of the Oxford cast was complete.