The Ashmolean Museum's collection of plaster casts is one of the oldest and best preserved in Britain. Its history begins almost two hundred years ago, when plaster casts of ancient Greek and Roman statues could be found in several parts of the University. They served to decorate rooms, especially libraries, and to proclaim the Glory of Greece and the prestige of Oxonians who had made the Grand Tour to the Mediterranean. 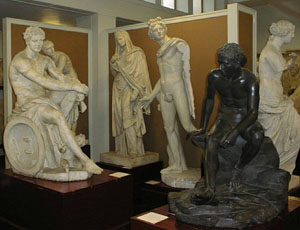 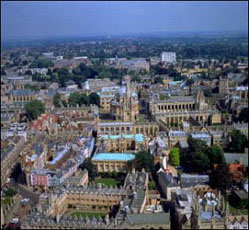 Casts in the Bodleian Library

Some early plaster models were displayed in a long room on the upper floor of the University's Bodleian Library. Known as the Picture Gallery after its collection of paintings, it became the first in Britain which was open to the public.

The watercolour of the Picture Gallery was painted in the second half of the 19th century. A plaster model of the Parthenon, made in Paris in 1823, can be seen in the glass case in the centre of the room.

Casts in the Radcliffe Camera

In the nearby Radcliffe Library, named after its benefactor, Dr John Radcliffe, larger plaster casts were displayed. The library is now known as the Radcliffe Camera. 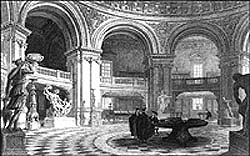 In this view of the interior, dated about 1835, plaster casts of Artemis of Versailles stand on the far left, the Laocoon Group to the left of centre, and the Apollo Belvedere just to the right. The Borghese Warrior is a little further round, and the Diskobolos is disappearing off to the right. Some of these casts are now in the Ashmolean Museum's Cast Gallery. 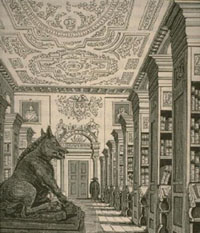 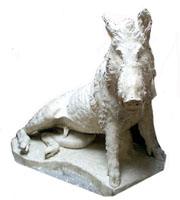 The Queen's College, on High Street, was given a large plaster cast of a wild boar, in 1774. For some time this cast stood in the college library. Today it is in the Cast Gallery of the Ashmolean Museum. An article in the Oxford University and City Guide of 1820 may explain why this particular cast was given to the college.

The marble statue from which the cast was taken was found in Italy in the 16th century, and exhibited in the Uffizi Gallery, Florence. The statue was highly regarded and often copied because it was thought to be a 4th century BC Greek original. It is now known that it is not an original, but a copy of an earlier work.

In 1845 the present museum opened on Beaumont Street, providing an opportunity to bring these casts together. Initially known as the University Galleries it was later given the name of Ashmolean Museum.

The architect Charles Robert Cockerell had studied ancient architecture in Greece. His knowledge of Greek art and architecture in general, and of the late 5th century BC Temple of Apollo at Bassae in particular, profoundly influenced his design for the University Galleries. 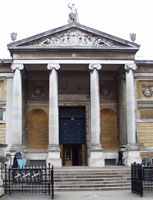 Apollo himself presides over Cockerell's building whose colonnaded portico and pediment closely resemble those of ancient Greek temples. 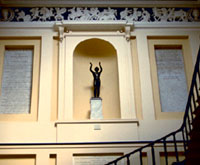 Marble frieze (about 400 BC) from The Temple of Apollo at Bassae, now in the British Museum.
Photographs: John Boardman

Cockerell decorated the walls of the museum's Great Staircase with plaster casts of the Bassae frieze. Blocks of the original frieze had been brought from Greece to the British Museum in 1815.

Apollo and the Muses 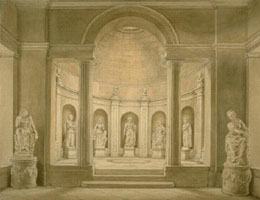 Within the main entrance of the museum Cockerell designed an elegant semicircular area where plaster casts of Apollo and his Muses were displayed. These casts had been made in Rome from ancient marble statues found at Tivoli in 1774. Neither the semicircle nor the plaster casts exist today. 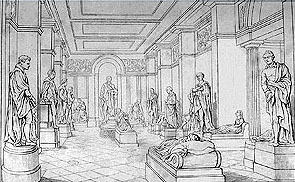 On the walls of the building's West Wing, Cockerell placed plaster casts of the Parthenon frieze. They can just be seen in this etching of about 1850, and, more clearly, in the photograph below. The casts shown in this etching are Sir Francis Chantrey's original 19th century plaster models. Cast from the finished clay works in his studio, they were used as pointing models for carving the final sculptures in marble. 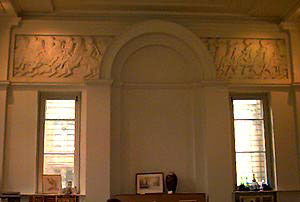 The West Wing was redeveloped in 1997 to house the Museum Shop and a new entrance with access to the restaurant below. This photograph shows the frieze at the southern end of the West Wing as it appeared at this time. In 2011 the West Wing was incorporated into the new galleries of Ancient Egypt and Nubia 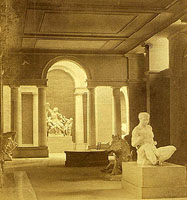 Plaster casts from classical sculpture stood in the Long Gallery leading from the Great Staircase towards the West Wing. They can be seen in this photograph of about 1890 when the number of plaster casts from Greek and Roman sculpture was greatly increased. At the end of the 19th century the collection was exhibited in another part of the museum and the Arundel Collection of marble sculpture, dating from the early 17th century, was exhibited in the Long Gallery, known today as the Randolph Gallery.

Opening of the present Cast Gallery 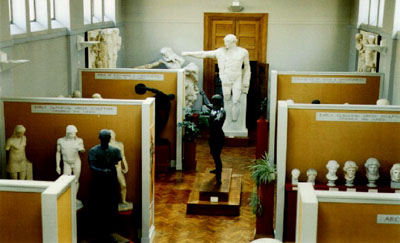 The present Cast Gallery opened in 1961. Its display was designed by Bernard Ashmole, who was then the University's Professor of Classical Archaeology and Art. The University expects to build a new gallery for the cast collection in due course.