Aphrodite, naked but for dress the end of which she holds in one hand, twisted around her arm and shoulder, to fall behind her back and over the front of her near thigh (not altogether logically). She wears an earring. Before her on the ground a scroll or quiver. Behind her Eros skips forward holding up a small thyrsos with ribbons. Ground line.

Apollo (?), wreathed and naked, seizes in his arms the near-naked body of a woman. Ground line.

Bust of Asklepios seen from three-quarters back, his hair bound and holding a staff with a snake curled around it.

Dea Roma seated on a throne (?) leaning against a shield (the inside shown?) under which is a corselet. She holds a shield, wears a helmet and corslet with dress across it, and on her outstretched hand the figure of Nike holding a staff and a wreath towards her. Ground line.

Head of Athena. A snake rides from the front of the crown of the Corinthian helmet on which is figured a horseman; long hair knotted at the neck, and dress.

Head of Athena? Long hair, the helmet without cheekpiece.

Hermes, wearing winged petasos, winged boots and chlamys, steps forward holding a caduceus and a child on his outstretched arm. Ground line. The child might be Dionysos or Achilles.

Nike frontal, wearing a peplos which flies away from her feet. She stands on a globe, and holds a wreath and a rectangular standard (vexillum) slung on a pole.

The type may celebrate a victory (Actium?).

Omphale, naked but for Herakles' lionskin which she wears around her shoulders and his club over her shoulder.

Perseus, naked, holding behind his back the head of Medusa wrapped in a cloth, and before him his sickle-sword. Short ground line.

Romulus and Remus suckled by the wolf, beneath a tree. Ground line. 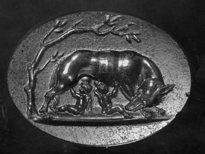 Bust of Selene, dressed and wearing a peaked diadem, a crescent moon over her. Below, a shrimp.

The Muse Terpsichore seen from behind, naked but for dress around her shoulders, holding a lyre, on tiptoe. Inscribed in Greek: TERPSICHORE. Short ground line.

The pose is that of a dancing maenad.

Thetis carried by a young Triton over waves. She wears her dress around her legs and holds a shield with gorgoneion blazon, new armour for her son Achilles. 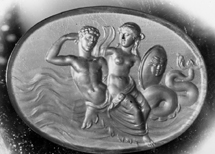