A plump silen with dress wrapped around his waist, is playing double pipes before a phallic body-herm on a pillar, with a thyrsos leaning against it. Ground line. 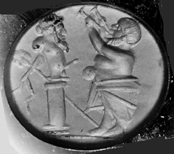 A young satyr with goat tail seated on an animal skin - muzzle and forelegs visible. He has a spiky wreath and holds a syrinx.

An elderly man (satyr?) with a cloak over one arm, holding a thyrsos and a bunch of grapes> behind him a vine with a bunch of grapes, before him a wicker basket full of bunches. Ground line.

Horned Pan with goat legs steps forward holding out a ram's head, and on his other arm a lagobolon and goatskin. Ground line.

Bust of a young satyr wearing an animal skin and shouldering a lagobolon.

Type of the 1st cent. BC, probably a modern copy.

Bust of a lightly dressed maenad, wearing a wreath of flowers and with a small-headed thyrsos over her shoulder. Inscribed in Greek: PA.