A griffin attacks a stag. Inscribed in Cypriot: a-ke-se-to-ta-mo, 'of Akestodamos'. A small 'sun-face', perhaps a late addition.

The shape is that adopted in the western Persian empire, though seldom with such a purely Greek motif as this, for a Cypriot owner. 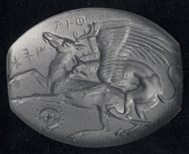 A naked man holding a spear leads a horse. In the field a mock inscription. 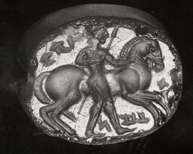 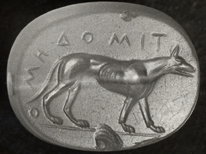 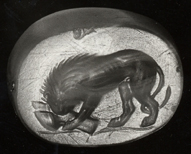 A naked girl Pan, with forehead horns and a goat's tail, leans on a pillar of rock, holding a cup (?). Short ground line.

This is the earliest evidence in Greek art for a female Pan.