A male four-winged demon wearing a corselet, holding a wreath and a flower, accompanied by a snake. Hatched border.

Such demons are commonly female in Etruscan art.

Kapaneus. A naked warrior holding a shield collapses, with a broken spear passing through his neck and body. Hatched border.

It is usually Zeus' thunderbolt that is shown for such figures.

Cornelian pseudo-scarab, the back carved as a frontal siren.

A fully dressed winged goddess restrains a warrior, with helnmet, shield and spear, who is moving away from her. Inscribed in Etruscan ACHLE, Achilles. Hatched ground line and border.

The occasion is not made clear in accounts of Achilles and could be an invention of the engraver, but the involvement of goddesses with heroes was commonplace in Greek epic, though this one cannot be securely identified. A near-replica, mentioned in RA, was also said to be in the Danicourt Collection, but this may be an error. The subject is discussed by E. Zwierlein-Diehl in Festschrift Dirlmeier-Pöschl (1976) 22-3.

A collapsing warrior, naked but for his shield, struck in the shin by an arrow, bleeding. Hatched border.

A stooping warrior in a chlamys is stringing his bow. Garbled inscription in the field. Hatched border.

A dressed maenad dances, her head thrown back in ecstasy, holding a lyre and a crooked thyrsos (snake?). Hatched border. 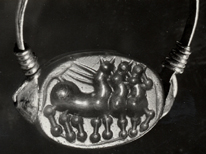 A man with a stick. Line border.

The heads of a grazing stag and a horse, with a single, body, a wing and two tails. Beaded border. 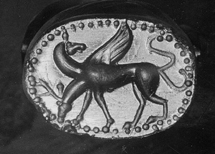 A woman, with stippled dress around her legs, looks in a mirror with her other hand behind her head. Hatched border.