The upper part of a four-winged deity hovering over a mountain (?). His head is radiate and there is a radiate sun-disc at his belly; his arms outstretched. Beaded border.

A hellenized version of an eastern sun god. 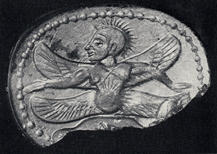