A lion-headed figure holding a staff and an ankh; disc-and-crescent.

A four-winged beetle holding a winged disc over its human head; a smaller disc held in its hind legs. A symbol of the sun. Line border. Inscribed in Hebrew blth, its owner's name.

A typical egyptianizing example of a Classical Phoenician scarab, 5th cent. BC.

Herakles with his lionskin at his neck raises his club and holds out his bow over a cowering warrior, helmeted, with spear and shield. Hatched border.

Another Classical Phoenician scarab, but with a totally hellenizing subject, about 500 BC.

A lion attacks a goat. The lion's head is rendered in a combination of frontal and profile view, giving an impression of three-quarters. Hatched border.

Purely Greek style for a Classical Phoenician scarab, with the typical 'pinched back' of the class. Early 5th cent. BC. 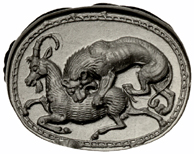 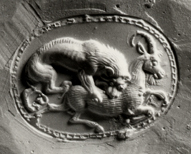