Two articles have been published in Apollo, The International Magazine for Collectors

Professor Sir John Boardman, Britain's most distinguished historian of ancient Greek art, talks to Diana Scarisbrick about his dazzlingly ambitious new book, his early career and his current campaign against politically correct obstacles to the collecting and study of ancient art. 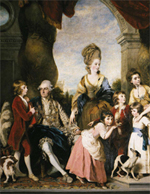 In the 18th century the 4th Duke of Marlborough formed a great private collection of classical gems, dispersed at auction in 1899. Sir John Boardman describes his quest to track down these 800 tiny masterpieces, now scattered across the world.