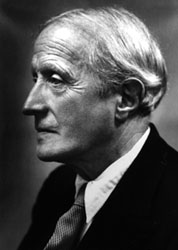 Sir John Beazley (1885-1970) was Professor of Classical Archaeology and Art in the University from 1925-1956. A world authority on Greek Art, he established the study of Athenian figure-decorated pottery as a branch of fine art. His scholarship now forms the basis for the Beazley Archive Pottery Database. 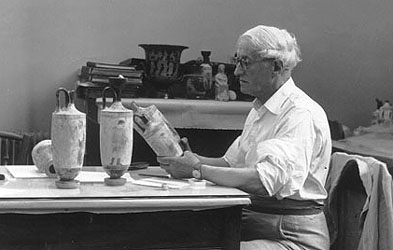 By 1908 Beazley had completed his undergraduate studies at Oxford and become a lecturer in classical archaeology under the University's first professor, Percy Gardner. As an undergraduate Beazley had been a close friend of the poet James Elroy Flecker; in the photograph above Beazley is standing, the dark Flecker seated. In 1907 Flecker dedicated his first published volume of poems to Beazley, and in 1911 Beazley published some of his own, which Flecker considered to be very fine, although modern poetry critics do not agree. Beazley's first published article on Greek vases - an unexceptional account of three in the Ashmolean Museum - appeared in 1908. Two years later he published his first list of vases assigned to an anonymous painter, and the following year 1911 he published another. By the time Beazley had established his method in print Warren, then in his 50s, was well known as a collector of classical antiquities. His interest in Greek vases had begun thirty years earlier, when he bought his first in Oxford. He too had published poems, and mutual interests brought the two men together. When Warren came to mainly live in Oxford after 1915, Beazley remained close to him. It is said that Beazley met Berenson under Warren's patronage. Warren's patronage certainly enabled Beazley to travel to the United States in 1914, and to publish Attic Red-figured Vases in American Museums in 1918. Dedicated to Warren and Marshall, the book paid particular attention to the vases they had acquired for Harvard University, the Museum of Fine Arts in Boston, and the Metropolitan Museum in New York. The text was a series of short essays about individual painters, with lists of the vases Beazley had attributed to each. The illustrations were photographs and drawings, Beazley's own, traced off the surface of the vase - the drawings used hereafter.

Set against this background of scholarship Beazley's method of studying Athenian vases and assigning them to painters can be understood. When he was an undergraduate Greek pottery was not a subject in the University's syllabus. Beazley largely taught himself. Furtwängler and others had begun to identify features of shape, pattern, design and figure style which they thought were important. Beazley developed the process further. The notebooks, notes, sketches and drawings, which are in the Beazley Archive today, enable us to follow his progress. Like other young men who had completed their undergraduate course, Beazley set off for the continent - a young academic's 'grand tour'. This is the first of many notebooks; his undergraduate college, Balliol, is still given as an address.

He has travelled to Palermo and his eye has been caught by a large red-figure volute-crater with Amazons, made in Athens around 460 BC. Furtwängler had described and illustrated it in 1900. Although what is recognised today as 'Beazley's method' had not yet been set out in a publication, essential elements were already present in these notes on that vase, dated June 1908. Here there are sketches of parts of the shape, pattern-work, and on other pages, of figure-style, parts which he thought were significant. How Beazley came to his method, and what direct influence Berenson, or the method he adopted from Morelli, had on Beazley, is unclear. Beazley's family had moved to Brussels in 1897, obliging him to travel from London to the continent regularly on school holidays. He could easily have been aware of Crowe and Cavalcaselle's Early Flemish Painters. Indeed, he is said to have prepared his own list of Flemish paintings by artists, but this has not been preserved. Later, in 1925, when Beazley was being considered for the professorship of classical archaeology several of his referees drew attention to his wide knowledge of art and to his responsibilities for the paintings in Christ Church. That collection, known today as the Christ Church Picture Gallery, is one of the jewels in the University's crown. 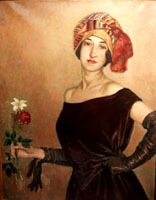 In 1910 and 1911 Beazley published articles which formally presented his method to the scholarly world. Unlike the older German scholars, who had tended to focus on high quality vases with inscriptions, especially signatures of painters, Beazley chose to study unsigned vases, proudly announcing that anonymous does not mean unknown. Using notes, sketches, finished drawings, and photographs, Beazley revealed the identity of the painters. The photographs were a later addition to his apparatus of scholarship, and initially largely the work of Marie Bloomfield, whom he married in 1919.

Beazley published the fullest account of his method in 1922, in an article entitled 'Citharoedus'. The name comes from the young man playing a cithara on this vase (below) in the Metropolitan Museum, a vase Beazley assigned to his anonymous 'Master of the Berlin amphora'.

Throughout the article he speaks of a 'system of forms' - forms in shape, design, patterns, figures and execution of technique. Beazley taught himself to recognise the system by drawing the details he considered important over and over again. If all elements of the 'system' are examined in relation to each other it can be said that the connoisseurship of Athenian vases rests on firmer ground than any other art form.

Drawings by Beazley from the Athenian
red-figure vase above

An essential tool for recognising the painter was to copy his lines. The most elaborate of Beazley's drawings are the ones he traced off the vase and transformed through a very laborious process into finished drawings such as this (left) of the youth singing to the cithara. Turning the vase around Beazley drew the figure on the reverse (right) with equal care. When he had identified the 'system of forms' he followed it through the painter's career, if the evidence was sufficient. Here I use only one example: a single long dark line defines the profile of the near leg but many shorter curving lines define the folds of the drapery over both legs.

The system of lines appears here, to the left, on an early and fine vase, in a simpler form at about the same time. Following it through perhaps 100 examples over as much as forty years Beazley could still discern its original form in a very late figure such as this, to the right, where the system has disintegrated - perhaps through old age and poor eyesight. Beazley concluded that the system was the creation of one man, whom he named after the amphora (below) in Berlin.

Athenian red-figure vase
attributed to the Berlin Painter by Beazley