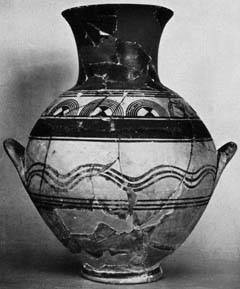 From 1000-900 Protogeometric, or first-geometric, pottery displays an advance in the technology of fabrication and in the design and execution of the decoration over sub-Mycenean. It also shows a very modest pattern of distribution away from the place of manufacture. These features indicate that Greece was beginning to emerge from a 'Dark Age' which followed the collapse of the Bronze Age civilisations of the Cretans and Myceneans. The decoration of Protogeometric pottery is simple; motifs tend to be curvilinear. Figures are rare, almost always animal, and almost always shown singly.

A particularly rich source of Protogeometric (and Geometric) pottery is the area of the Kerameikos, north-west of the Acropolis.