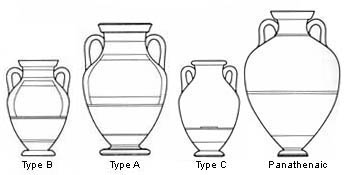 The amphora (pl. amphorae; from Greek amphi - on both sides, phero - carry) is a two-handled pot with a neck that is considerably narrower than the body. It was used for the storage of liquids and solids such as grain. Undecorated 'coarse' amphorae, with their lower part tapering to a point, were the standard transport containers in the Mediterranean. They are frequently depicted in symposium scenes. Panathenaic prize amphorae are perhaps the closest in shape, but the majority of painted amphorae are grouped into two main types, the one-piece belly-amphorae, and neck-amphorae, which have a clearly-marked neck. Also discussed here is the pelike, another two-handled storage vessel.

The belly-amphora has a continuous profile from lip to foot. It is usually lidded. 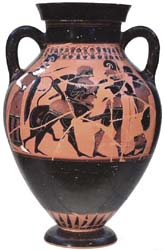 The most typically occurring form is termed Type B, characterised by the combination of round handles, the mouth's straight lip, and the convex profile of the one-piece foot (termed 'echinus'). The shape is old, dating back to the seventh century, and continuing to be produced until the mid-fifth century. 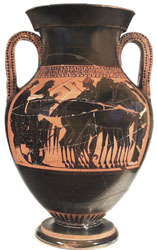 During the third quarter of the sixth century, a new, more elaborate type is introduced. Type A amphorae are recognisable by their flat, flanged handles, often decorated with ivy, and two-part ('stepped') foot.

A third type, Type C, is less common. Like Type B it has a one-piece foot, but the lip is round ('torus') rather than straight.

The broad body, narrow neck and foot of Panathenaic amphorae gives a shape reminiscent of transport amphorae. They served as prizes in the Panathenaic Games, containing oil for victors. The Games seem to have been established in Athens in the 560s, and the earliest examples of the shape can be dated to around the same time. Panathenaic amphorae are useful for dating, since they continue to be produced well after the fourth century, becoming more elongated and elaborate. From the fourth century, the name of the archon for the year is inscribed, permitting an unusually precise means of fixing chronology.

Panathenaic amphorae are only decorated in the black-figure technique. Athena always appears on one side, with the inscription "ton Athenethen athlon" - a prize from Athens. The event for which the vase was a prize is depicted on the other side

Amphorae 'of Panathenaic shape' refer to vases of this shape that are decorated in different ways, such as those in red-figure. Smaller versions also occur, perhaps as souvenirs. 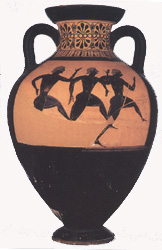 The neck-amphora is identifiable by its clearly defined neck. The shape is old, recognisable among Geometric and Protoattic vases. In Athenian black-figure, examples can be ovoid (notably the so-called Tyrrhenian amphorae, which seem to have been made for an Etruscan market), but the standard type has a more obvious 'shoulder', perhaps inspired at some stage by East Greek shapes. Another distinct type is the strap-handled Nikosthenic amphorae. These imitate a shape found in Etruscan bucchero, and the find-spots suggest that an Etruscan market was intended.

Neck-amphorae continue to be decorated with the black-figure technique, but later examples (from c.500) are often smaller. Those with double-reeded handles are termed 'doubleens'. Among the various types found in red-figure, distinctive are the small Nolan amphorae, identifiable by their high necks, and named after Nola where many examples were found.

The Greek term pelike (pl. pelikai) was used for a number of shapes, and we do not know what this one-piece vessel with a distinctive sagging belly was called in antiquity. It seems to have been invented after the introduction of the red-figure technique, although there are examples in black-figure. It continues to be produced into the fourth century. It is shown in use as a container for liquids.