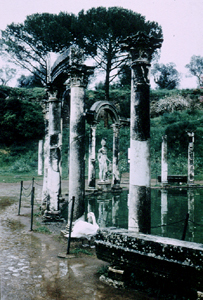 During the 18th century there were spectacular excavations at Tivoli, outside Rome - seen here to the left, Ostia, and also to the south, at Herculaneum and Pompeii. More casts were made and more collections were formed.

In 1747 a plan was put forward in London to have a 'cast museum', but the first casts available to artists were in the home of the Duke of Richmond who opened his collection in 1758. The first university to assemble casts for teaching students was Göttingen in 1767.

The remarkable collection today in Dresden owes much to Anton Raphael Mengs who gave the city the casts he had collected in Rome. 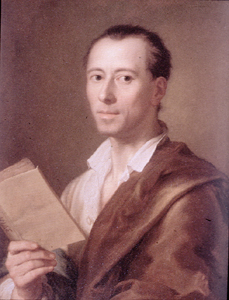 Shortly before his death in 1779 Mengs put forward the theory that The Most Beautiful Statues - Laocoon, Torso, Apollo Belvedere, Gladiator, and others - were not - as Winckelmann thought, original Greek masterpieces; they were later copies.

Fifty years earlier the English connoisseur and writer Jonathan Richardson had made a similar observation in a guidebook to Italy which Winckelmann himself regarded highly. Remarkably, these publications, and even the arrival into northern Europe of original Greek masterpieces, such as the sculpture from the Parthenon at the beginning of the 19th century, had little impact on the cultivated person's perception of the antique. The influence of the Most Beautiful Statues remained strong.