Studies in Gems and Jewellery

This new series is in the same format as Studies in the History of Collections and Studies in Classical Archaeology and has the same publishers - The Classical Art Research Centre and The Beazley Archive in the University of Oxford and Archaeopress, the Oxford-based publisher of British Archaeological Reports. It is intended for studies in gems and jewellery from ancient to neo-classical, both monographs and the publication of contents of collections, and is inspired by the Beazley Archive's rich resources of gem impressions and casts, gathered first by Sir John Beazley himself, later by John Boardman, Martin Henig, and others. 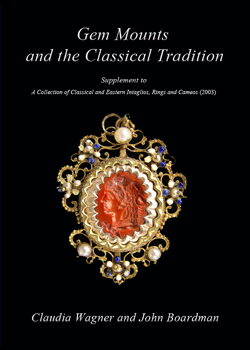 by Claudia Wagner and John Boardman

This volume is a supplement to Classical and Eastern Intaglios, Rings and Cameos.

This volume concentrates on the types of elaborate mounts for many of the gems, illustrating especially Sicilian gem-mounting of the 18th century; and includes essays on the way in which the ancient traditions in gem engraving and the classical style and subject matter survived or was revived and rediscovered in later centuries; and on antiquarian books devoted to the illustration of ancient gems. There are supplements and corrections also to the main volume.