Excavating Classical Culture - Recent Archaeological Discoveries in Greece, inaugurates a new series, Studies in Classical Archaeology, in the same format as Studies in the History of Collections.

The series is published by the Beazley Archive in the University of Oxford and Archaeopress, the Oxford-based publisher of British Archaeological Reports. It aims to make high quality books on classical archaeology and art available quickly and at a reasonable price.

The second volume in the series, The Lewes House Gems, by J.D. Beazley was published in October 2002. It is a revised edition, by Sir John Boardman, of Beazley's classic publication of 1920.

The third volume is Reception of Classical Art, an Introduction. A series of lectures took place in the autumn of 2003 designed to complement two options in the Master of Studies in Classical Archaeology. It was decided to publish the lectures as delivered, without footnotes, but with bibliographies specifically chosen for our students.

The fourth volume is Essays in Classical Archaeology for Eleni Hatzivassiliou 1977-2007. A memorial volume, compiled by friends and colleagues, presented to her parents on the first anniversary of her tragic death on the island of Lesbos in July 2007.

The fifth volume is Cruelty and sentimentality: Greek attitudes to animals, 600-300 BC. A work examining archaeological and literary evidence to discover how ancient Greeks regarded, interacted with, used, and treated tame and domestic animals, as well as some prominent wild species. 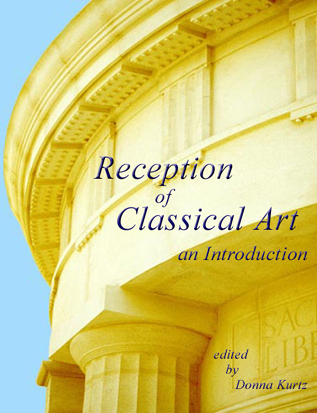 Serendipity lies behind this modest publication. A series of lectures took place in the autumn of 2003 on The Reception of Classical Art designed to complement two options in the Master of Studies in Classical Archaeology. It was decided to publish the lectures as delivered, without footnotes, but with bibliographies specifically chosen for our students. The book is dedicated to "the first cohort of students in the undergraduate degree course in the History of Art, October 2004".

The book contains sections on: An introduction to the reception of classical art by Donna Kurtz, Beazley Archivist, Professor of Classical Art and editor. Nudity in art by Sir John Boardman, Lincoln Professor of Classical Archaeology and Art Emeritus. Medals and the reception of antiquity by Henry Kim, curator of Greek coins and modern medals at the Ashmolean Museum. Renaissance istoriato Maiolica by Kate Nichols, Research Assistant in the Beazley Archive. Neoclassical gems by Gertrud Seidmann, Honorary Research Associate of the Institute of Archaeology. The Sackler Library - ancient and modern by Robert Adam, Director of Robert Adam Associates and architect of the Sackler Library.