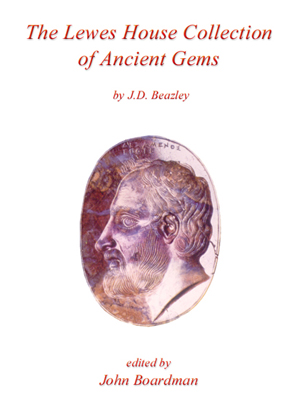 The collection of classical gems at Lewes House in Sussex belonging to Edward Perry Warren (1860-1928) was one of the finest of its day, containing many masterpieces, not least the signed gem by Dexamenos shown on the dust-jacket below.

John Beazley's publication of 1920 was a landmark in gem studies for its attention to detail and deep scholarly appraisal of each piece. His text is repeated here, its references updated, with new and enlarged photographs of impressions of each piece. It is a monument to both sublime scholarship and an unrivalled collection. The Lewes House gems were acquired for the Museum of Fine Arts in Boston from Warren, an old Bostonian.

John Boardman, who has edited the text of The Lewes House Collection of Ancient Gems, is Emeritus Professor of Classical Archaeology and Art at the University of Oxford. He has published widely on various aspects of Greek art and archaeology; his Greek Gems and Finger Rings was reissued in 2001 in an enlarged edition.

Cornelius C. Vermeule III, who contributes an appraisal of Warren and his collecting, is Emeritus Curator of Classical Art in the Museum of Fine Arts, Boston.

Mary B. Comstock, Curator in the Classical Department of the Museum of Fine Arts, Boston, has compiled lists of new references to each gem.

Robert L. Wilkins is Photographer at the Institute of Archaeology, University of Oxford.