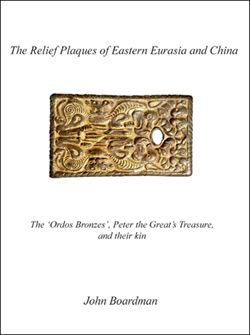 The Relief Plaques of Eastern Eurasia and China
The 'Ordos Bronzes', Peter the Great's Treasure, and their kin

This is a study of the relief plaques of the 'Ordos bronzes' and their kin in north China and Central Asia, including Peter the Great's Treasure in the State Hermitage, St Petersburg. It attempts to classify them by shape, style and iconography, and to trace their origins, listing and illustrating as many specimens as seemed necessary to convey to the reader the unity of individual series as well as their variety. One class is distinguished as probably made by the Chinese and for the Chinese after their adoption of nomad dress and tactics for archer cavalry in the later 4th century BC.