The Poniatowski Collection of gems

This site offers an illustrated catalogue of a 19th century collection of engraved gems which is effectively a major corpus of original Neo-Classical interpretations of Classical mythology, as known from literature, not art.

It was formed by Prince Stanislas Poniatowski (1754-1833), who commissioned about 2500 gems and encouraged the belief that they were, in fact, ancient. The greater part was the product of a group of gem-engravers in Rome who turned to Classical literature, especially the works of Homer, Vergil and Ovid for inspiration, and not to the many ancient Classical representations which had inspired much Neo-Classical art. As such, it seems to have been generally overlooked as a source for such later depictions of mythological subjects, although comparable works by other Neo-Classical artists, in Britain and on the Continent have been well studied.

Poniatowski published a summary catalogue of his gems, Catalogue des Pierres Gravees Antiques de S.A. le Prince Stanislas Poniatowski, in 1830, with more elaborate descriptions following in two versions in 1833. His collection was sold after his death at a Christie's auction in 1839 (April 29-May 21). The gems were later recognised as 'modern', and were unjustly spurned and sold cheaply. The majority was acquired by John Tyrrell, but some were purchased by others. All have been widely dispersed ever since. 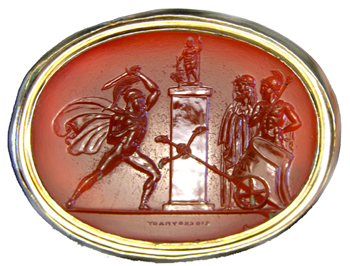 Alexander cutting the Gordian knot by which the cart is tied to a pedestal supporting a figure of Jupiter; a priest and a warrior are standing near. Signature: Dioskourides. 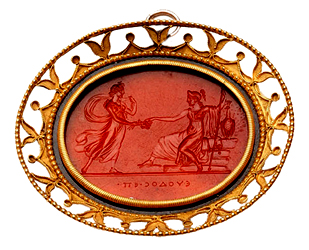 Tyrrell published his collection of about 1200 gems in 1841, and republished a selection in 1857 and 1859 with early photographs: James Prendeville, Photographic Facsimiles of the Antique Gems formerly possessed by the late Prince Poniatowski, accompanied by a description and poetical illustrations of each subject carefully selected from classical authors. This was a very early use of photography in an art-historical publication, but only the first 471 pieces were illustrated - and the photos were not taken of the original gems but of impressions. Most sets of impressions in circulation today are these Tyrrell gems. The catalogue, which is a separate volume on which this part of the website will be based, contained brief captions for each piece, and often lengthy translations of ancient authors describing the relevant myth. 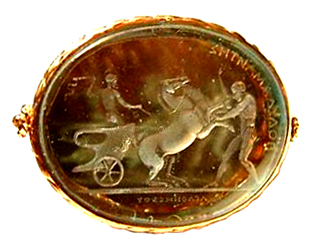 Polydamas stopping a chariot when driven at full speed, over which is inscribed Polydamantes. Signature: Agathemeros 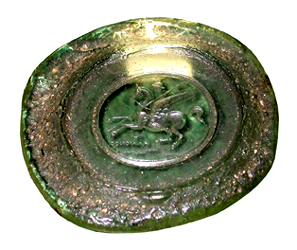 We are unaware of any complete collection of impressions of the Poniatowski gems, but there are more than 600 plaster impressions of the Tyrrell gems in the Beazley Archive in Oxford and these have been included on the website. It will be augmented by photographs of originals and glass impressions, where available. It is hoped that this website will encourage museums and collectors to let us know of the whereabouts of other Poniatowski gems so that the lists may be completed (to claudia.wagner@beazley.ox.ac.uk, please). Some progress in this has already been made and over 1500 illustrations have been collected so far. 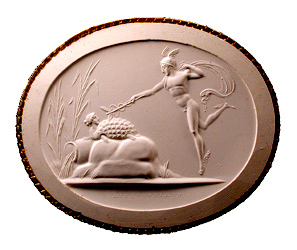 The engravers added signatures, Greek names, to many of the gems to enhance the air of authenticity. The gems are mainly of cornelian, ovals with flat or lightly convex faces, measuring about 30x40 cm. They were often elaborately set, either individually or into bracelets and necklaces, as those which were in the Wellington Collection (sold by S.J. Phillips in 1977/8). Despite their mixed fortunes the gems are prime works of the engraver's art, and their iconography is original. They will be assembled here with the intention of providing information about a neglected aspect of Neo-Classical art, and in the hope of the virtual reconstruction of a unique collection. We have been guided and encouraged by Gertrud Seidmann (Oxford) who is preparing a study of the collector. 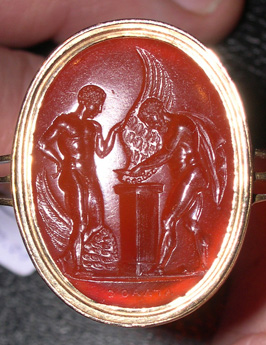 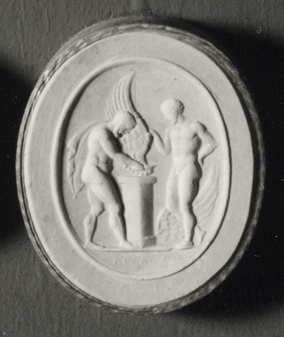 A plaster impression of the Deadalus gem is in the Berlin Daktyliothek Poniatowski - a set of 419 impressions presented to the King of Prussia by the prince himself. They were shown to Ernst Heinrich Toelken, the director of the Antiquarium, Berlin, in 1832. He was the first to cast doubt on the Antiquity of the gems but also judges them with great admiration: "The impressions are indeed the most beautiful you can expect to see in art." His suspicion was not aroused by the quality or style of the engraving, but by the signatures of the engravers known to us from the Greek and Roman world. How, he argues, can engravers working hundreds of years apart produce intaglios of the same style. "Thus, we have here, -- and I am extremely sorry to give this hard judgement! -- in works and words a scientific deceit of such dimensions never seen in art history before."