These are figures alone or in groups, other than those with lions or seated before an incense-burner.

A. With pointed helmet

16/1 Ibiza no. 61 (Barcelona 9287). BH; on a silver hoop C. Walks holding out a severed, bearded, human head; shoulders an axe and has a shield with lion-head boss at his back; waves below, a branch in front. I

16/4 Cagliari 9456 Spano), from Tharros. Marmora, pl. B 77; Hölbl, Sard no. 132. BL; on gold hoop B. Man with tasselled helmet, long dress; holding a spear and a short khnum sceptre; cartouche, crescent and ankh in field; standing on cavetto base. III 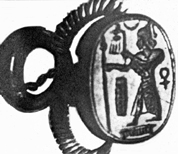 B. With flat square crown

Drawing a bow, wearing a long skirt, and standing over a lion. The type of crown is not clear, but not, it seems, Achaemenid.

All have short dress and seem not particularly regal, but the goat as adversary appears in monumental near eastern and Persian art. 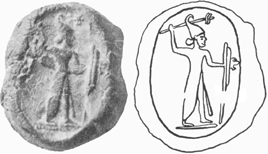 16/X4 Karthago II, pl. 7c. Clay bulla. BH;EXnb. Riding a horse, shouldering an axe. The fine border and deep exergue suggests this might be from a metal intaglio, but there was a mount, so perhaps just a hard stone, well cut.