A141l
A pirate fleeing from an advancing Satyr who's flaming torch can be seen top right. 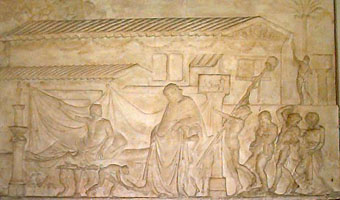 E011
Dionysos and his retinue visit the house of a mortal. The man, seated on a couch, turns to greet the god. A satyr supports the already drunk Dionysos; another removes his shoes so that he can lie on the couch behind him; another carries his thyrsos. Other satyrs dance and play music. 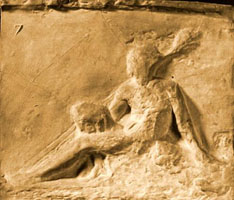 A141m
Bearded satyr, cloaked in a panther skin and armed with a torch, running to the left.

The front half of a dolphinman is shown to the right. 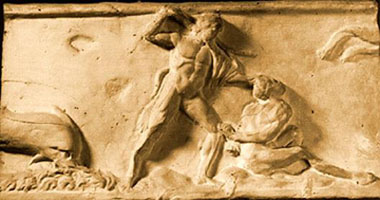 A141g
Satyr hitting a seated pirate with a forked branch torn from a tree.

The front end of a dolphinman is shown to the left. 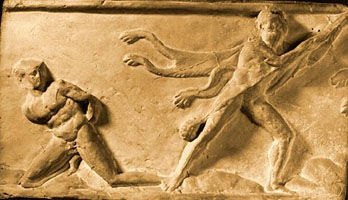 A141o
A pirate, kneeling and tied up, being attacked by a satyr wielding a thyrsos.

A141q
To the left one satyr leans against a tree, and to the right another holds a cup in his left hand and a jug in his right; to take wine from a krater. 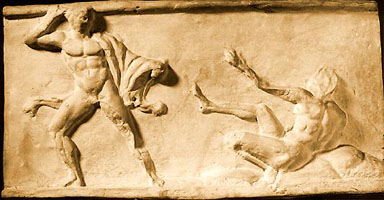 A141e
Satyr, carrying a panther skin and wielding a club, hitting a crouching pirate who falls on to a rock. 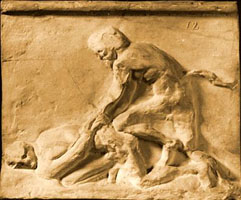 A141d
A pirate forced to the ground and tied up by a satyr. 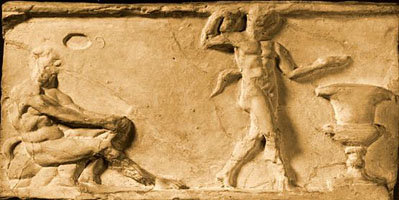 A141b
Satyrs; one seated on a rock, the other holding a jug in his right hand and a cup in his left to take wine from a krater. 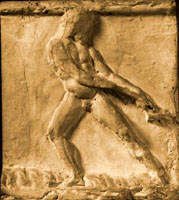 A141j
Satyr pulling on the leg of a captive pirate with both hands.

A141p
Satyr hitting a pirate, with a branch in his right hand, while the pirate tries to crawl to escape. A second satyr advances from the right with a burning branch. 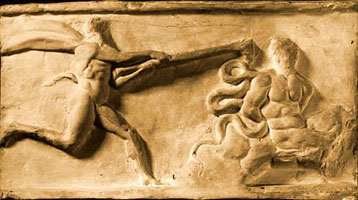 A141h
Satyr, wearing a panther skin, brandishing a torch and running towards a bound pirate who has been bitten by a snake on the right shoulder. 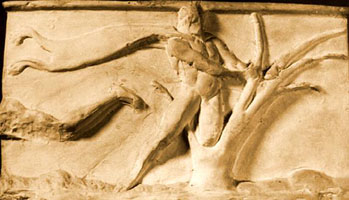 A141n
Satyr, wearing a panther skin, tearing a branch from a tree.

The rear end of a dolphinman is shown to the left. 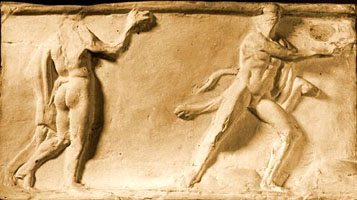 A141c
Satyrs; one gesticulating with a cup in his right hand, the other brandishing a pedum (sheperd's crook)

A141f
Satyr tearing a branch from a tree.
The rear end of a dolphinman is shown to the right.